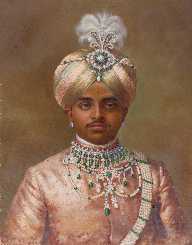 Krishnadevaraya was the 1509 to 1529 Emperor of the Vijayanagara Empire. He was the Tuluva Dynasty’s 3rd ruler. He was a great leader who was given the title Kannada Rajya Rama Ramana. This meant "Lord of the Kannada Empire." He is remembered as a great ruler who defeated Udayagiri Fort who had been unconquerable under the leadership of Gajapati Dev.

He also led to a great expansion of his empire. He was quite close to Timmarusu who was the prime minister during his time in power. In his later years, he named Achyuta Deva Raya, his successor. He was his half-brother. His son whom he had pronounced prince died before he came of age. It is believed he died of poisoning.

Krishnadevaraya was born on February 16th, 1471. His place of birth was in Hampi situated in Karnataka. His father was Tuluva Nayaka. He was an army commander and founder of the Tuluva Dynasty.

In 1509, Krishnadevaraya became the Emperor of the Vijayanagara Empire. His prime minister was Timmarusu whom they became quite close. He became like a father to Krishnadevaraya. Unfortunately for the new emperor, he came to power at a time of different conquests to overthrow the kingdom.

The wise Krishnadevaraya made friendship with the Portuguese. They were the greatest traders who occupied most of the coastline of the Indian. In return, he was able to be supplied with guns and Horses and other war supplies from merchants of these Portuguese. Furthermore, their engineers helped his empire to enhance a water supply.

In 1509, Krishnadevaraya had equipped his troops with sufficient war materials. This led to the defeat of Sultan Mahmud who led the Sultan of Bijapur. At last, his people living in Vijayanagara were free from their frequent raids. He also defeated other invaders after that. He was then honored with the title “establisher of the Yavana kingdom.”

In 1512 he made Cauvery River part of Srirangapatna province.  This was after his victory over Ganga Raja who was the Ummatur chief. He also defeated the Gajapati army followed by the invasion of Bezwada. He also conquered the capital of Gajapati Empire led by Prathapa Rudra. He continued his expansion of territory after invading the Bahmani kingdom.

Krishnadevaraya was married to two wives. Tirumala Devi was his chief queen. He married her around 1498. She was the daughter of the ruler of Srirangapattana, Veerappodeya. Together they had two sons and a daughter called Tirumalamba. Their last born son passed on when he was only 18 months old. He later married his other wife, Chinnama Devi. She was his favorite.

Krishnadevaraya took his last breath in 1529 at the age of 57.