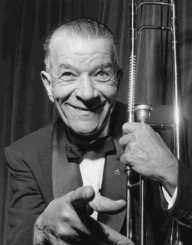 Edward Ory was born on December 25, 1886, in LaPlace in Louisiana. He grew up in the Woodland plantation farm. Ory started experimenting with music from an early age. He created his own instruments and formed his band while still in his teenage years. Ory and his band never got the reception they hoped for in Louisiana. In Louisiana, country music was preferred than jazz.

Ory started playing other percussion instruments in his music to appeal to the local audience. He created a fusion of jazz that was unique to him. As time went by, Ory contemplated going to New Orleans.

He moved to New Orleans in 1908. He was spotted by Buddy Bolden in the streets of New Orleans. He captivated Bolden by his ability to play the banjo and trombone with ease. Ory was unique as he sang most of his songs in French with little English.

For a while, his health was ailing him. His doctor advised him to move out of the region to a climate which was less cool than New Orleans. Ory moved his band to Los Angeles in 1919. He stayed in California popularizing his music in Los Angeles. He recorded his first songs in 1921, two years after relocating to the City of Angels. Apparently, his band was well received after they recorded their first songs. Ory and his group was the first band ever from New Orleans to have concerts in Los Angeles. In 1925 he moved to another jazz melting point, Chicago. He stayed in the city with his band until the advent of the Great Depression.

He fizzled out of the music scene in 1930. Due to the depression, he got little revenue from music. Ory retired to Los Angeles and started a poultry farm business. He operated the venture until the economic depression was over. In 1939, Ory made a comeback to music. As expected, most of the Americans used music to let go of the hardships they endured through the economic crunch.

In 1943, Ory revived the Kid Ory Creole Orchestra. He convinced his longtime friends Louis Armstrong, Barney Bigard, Bunk Johnson, and Mutt Carey back into the band. Ory continued with his jazz band touring the US cities for the next 23 years. In 1966 he retired from the music world.

Apart from music, Ory got some roles in movie film productions. He appeared in three films. The first one Crossfire was produced in 1947. Later that year, he acted in another film New Orleans. In 1956 he played a minor role in The Benny Goodman Story.

Kid Ory had a unique genre of jazz. He blended several instruments to produce tones and sounds that harmonized the soul. He used the exotic banjo from the Latin amerce, trombone, bongos, clarinet and other percussion instruments. He had most of his lyrics in the French language, a blend that few could manage.

Kid Ory married Barbara Ganung on September 5, 1955. The couple had one child and stayed together until his death in 1973.

After his retirement from active performing, Ory retired to the Pacific islands of Hawaii. He continued performing for the local audiences until his death. Kid Ory die on January 23, 1973. His body was transported and buried in Culver City in California.

Kid Ory was a vital ingredient in the popularizing of jazz in the US. He took the first jazz recordings to Los Angeles, where countrywide marketing was easy. After the depression, he was instrumental in the revival of the beat. He used the jazz renaissance to bolster severed relationships with his fellow musicians.

He over the years inspired young musicians like Trummy Young to explore their talent in music. In his career of over five and a half decades, Ory produced 34 songs with various band formations.

Though he was originally from Louisiana, Ory is a celebrated hero in his adoptive New Orleans. In 1986 he was posthumously inducted into the Big Band and Jazz Hall of Fame.