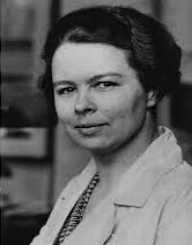 Katharine Burr Blodgett was an American physicist and inventor who held a number of patents, most notably low reflective invisible glass.

Katharine Burr Blodgett returned to New York in 1912 to study. She attended a private school, Rayson School. Here she was able to receive an education that was on a par with the education men would receive. Blodgett showed a talent for mathematics and won a scholarship to Bryn Mawr College in Pennsylvania. Blodgett received her B.A in 1917 having excelled at physics and mathematics.

Blodgett then went to Chicago University to study for a master’s degree. Blodgett’s study focussed on gas masks, World War I was raging at the time and chemical warfare had been a significant feature of the conflict. She published a paper on how poisonous gasses could be absorbed by carbon molecules. The paper was published in the Physical Review, and she completed her degree in less than a year.

In 1924, Katharine Burr Blodgett entered a Ph.D. programme in Cavendish Laboratory in England. She wrote a dissertation on the behaviour of electrons in ionised mercury. After two years Blodgett became the first woman to receive a Ph.D. from Cambridge University in 1926.

Blodgett worked closely with Langmuir and the two developed methods of applying monomolecular coatings to cover metals and glass. These coatings were only nanometres thick and were an advance on Langmuir’s early work. In 1935 Blodgett developed a way to layer these coatings one by one using an apparatus she named the Langmuir-Blodgett Trough.

Using this apparatus on the glass Katharine Burr Blodgett was able to make it 99% transmissive and thus created “invisible” glass. The visible light was reflected by the layers, and this countered the reflective nature of glass and so made it seem invisible. The coating became known as Langmuir-Blodgett film. The film Gone with the Wind was the first to use the Langmuir-Blodgett film to create a more transparent picture quality.

Langmuir-Blodgett film was used in the film industry for cameras and projectors. The military also made use of the film for submarine periscopes and spy plane cameras. Blodgett also developed a method to measure the thickness of film coatings. She noticed that different layers were different colours and so developed a colour gauge to show thickness, this method was hundreds of times more accurate than other methods. Blodgett also worked with Langmuir on improving the lightbulb.

In her career Katharine Burr Blodgett was awarded eight patents, she invented poison gas absorbents and methods for de-icing aircraft wings. In 1951, she received the Francis Garvan Medal from the American Chemical Society. Her home town Schenectady also honoured her in 1951 by declaring June 13 to be Katharine Blodgett Day. In 2007 she was inducted into the National Inventors Hall of Fame.

Katharine Burr Blodgett did not marry and instead lived in a ‘Boston Marriage’ relationship with Gertrude Brown and later Elsie Errington. Blodgett lived most of her life in Schenectady and was an actress in the town’s theatre. She loved gardening and attended a camp in Upstate New York to indulge her hobby.

Although she had no children of her own, Blodgett was a great influence on her niece, Katharine Blodgett Gebbie. Blodgett would always bring an assortment of gadgets when visiting her Brother’s children and these were key in Gebbie becoming an astrophysicist. She died in her home on 12 October 1979.

In addition to acting and gardening Katharine Burr Blodgett also did charity work, she was a treasurer of the Traveller’s Aid Society. Blodgett also enjoyed amateur astronomy, bridge and collecting antiques.