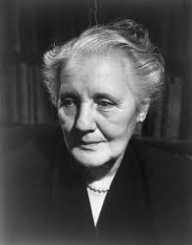 She enrolled to study medicine at Freiburg University in 1906. She later transferred to Gottingen and eventually graduated from the University of Berlin in 1911. She majored in the medical line of psychoanalysis. In her class, she studied together with Karl Abraham. Abraham was a student of the renowned German psychiatrist Sigmund Freud. She practiced medicine while researching with Abraham in local hospitals in Berlin. She also taught as an invitee at the Berlin Psychological Institute.

She founded the American Institute of Psychoanalysis in 1941. She gradually opposed the earlier accepted theories of Sigmund Freud on psychopathy. She raised concerns over the sexuality of the women in relation to the men. She argued that women libido was directly attached to their psychopathic emotions.

In withdrawal, she noticed the need to be or make other perfect and the need to restrict others inconspicuously.

All the needs were intertwined. If a person lacked the segment of compliance, they moved to aggression. If they failed in satisfying their needs in aggression, they withdrew from society and became suicidal or mentally disturbed.