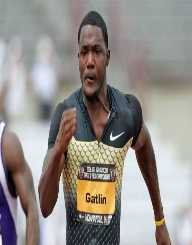 Justin Gatlin the early 2000s athletics pro was brought up in Pensacola, Florida. He was born on 10 February 1982 and was a talented sprinter of the 100-meter races. He rose to fame when he set a world record but was suspended when he became the victim of using the banned substance. After an extended period in suspension, he reappeared in the 2012 Olympics and came third receiving a bronze medal. In 2016 as well, he participated in the Rio Olympics and was position two winning a silver medal in the 100m sprint.

Born in Brooklyn, New York on 10 February 1982, Justin Gatlin spent his childhood years in Pensacola, Florida. He went to Woodham High School where he was a member of the athletics team and apparently the fastest in his club. With him on the side, the school won the state championship in high hurdles and sprints. With such a potential displayed, Justin was offered a scholarship to become a sprinter at the University of Tennessee. He joined the university in 2000 and became a winner in six of the NCAA sprint titles in a consecutively. Gatlin championed his school team known as ‘Volunteers’ which also won two NCAA titles.

Gatlin however, was banned from attending international competitions and suspended for two years due to use of amphetamines. Gatlin argued that the results could only read confidently due to the medications he was using since childhood. His appeals to be reinstated did not bear much fruit since his arguments were considered to be illegitimate. IAAF reconsidered this request and Gatlin was restored in 2002.

Another controversy struck the life of the sprinter once again in 2006, July when Justin Gatlin was suspended still. Gatlin disputed this allegation that he did not use any banned substance or performance booster drugs. However, blood tests showed he had testosterone elements in his system and was put on an eight-year ban and his 2006 record revoked. With many petitions, the prohibition was waived for four years, and Justin served the remaining 4-year ban. Gatlin resorted to working with the NFL Houston Texans during his suspension but did not sign in any of their teams although his performance was excellent.

Return to Track and Field

Justin Gatlin returned to the athletics competitions on August 3, 2010, and his first winning was in Rakvere in the 100m sprint at 10.24s. This finishing was however weak because he was not in a fit physical condition since he had gained weight. With time he made adjustments and progress like at Ergo World Challenge in Tallinn he scored a 10.17s win and in Joensuu as well. He later improved his finishing time when he came second after Yohan Blake (10.06s) with the 10.09s run.

Justin beat Tyson Gay at the 2012 Summer Olympics qualifiers in the 100m race trials. At the hearings Gatlin made a run of 9.80s gaining him the victory but came third at the Olympics in London on 5 August 2012. He made a series of Usain Bolt and Yohan Blake to a record of 9.79 seconds to the finish line. Gatlin ran before Usain Bolt in June 2013 winning a gold medal in Rome, Italy. Usain Bolt proved his dominance on August 11, 2013, at the IAAF World Championship when he clocked 9.77s against Justin’s 9.85s.

Gatlin becomes the gold medal holder in the 100m race in Brussels on September 5, 2014, with an improved time of 9.77s. He further made a remarkable improvement when he scored a 9.74s during the Qatar Athletics Super Grand Prix. Gatlin also ran in the 2016 Rio Olympics and came second after Usain Bolt (9.81s) with a score of 9.89s.