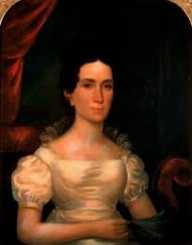 Julia Gardiner Tyler was the wife of the 11th US President John Tyler. She married the president after his first wife died. She served as the First Lady of the US for the remaining part of his presidency.

Julia Gardiner Tyler was born on May 4, 1820, on the island of Gardiner in New York. Her father was a wealthy landowner and practicing politician. He later served as the New York State Senator for four years until 1828. Her mother was Juliana Gardiner.

Tyler grew up in East Hampton in New York. She was first schooled at home but later sent to a formal school. She went to Chegary Institute located in New York. Tyler joined the school at the age of 15. She stayed at the boarding school for two years graduating in 1837. She went to stay in London England in 1840. She appeared in a local newspaper with an identified male figure prompting her father to send her to Europe. She stayed in several Western European countries. In September 1841 she returned to New York.

Julia Gardiner Tyler insisted for her mother to let her live in the city. The family decided to grant her a city life in Washington D.C. The family moved to the capital at the beginning of 1842. They stayed for a while and returned to East Hampton later in the year.

Julia first met President John Tyler in January 1842 while on a winter holiday with her family. She was briefly introduced to the president at the reception hall of the White House. President Tyler proposed to Julia soon after the death of the first lady Letitia Tyler. After a period of courtship, Julia consented to the proposal. They got engaged in 1844 after the death of Julia’s father.

Despite being a presidential wedding, the ceremony was a low keyed event. Both parties agreed to hold a less publicized event in honor of the late Julia’s father. On June 26, 1844, President Tyler married Julia Gardiner Tyler at the Church of Ascension in New York. In August 1844, the couple returned to the capital after a trip in several destinations in the US. She was then introduced to the America nation as their first lady.

The secretive wedding spilt the Tyler family. Julia was welcomed by the sons of the first marriage. President Taylor never disclosed the wedding to his daughters. They, in turn, hated and never reconciled with their new stepmother.

Julia Tyler became the first lady in the White House at the age of 23. Nevertheless, she amassed the courage to carry out her duties with zeal. She even changed the existing protocol within the white house. The most notable change came in the receiving of presidential visitors. The first lady introduced the lining up of guests to greet the president instead of the usual mobbing around the chief executive. Julia explained that this provided more order and security to the president. Subsequent presidential wives followed suit.

She instituted the playing of the anthem Hail to the Chief as the announcement of the entry of the president at any official public event. She hired a press officer to help organize her communication channels. Julia became the initial First Lady of the US to pose for her official photograph. She held a welcoming and exit dinner and dance ball for the presidential couple in the White House. Within a short period of half a year, Julia Tyler changed the role of the presidential wife. She gave the position of the First Lady official duties. The successive first ladies kept the responsibilities to the title.

When her husband’s time elapsed in March 1845, the presidential couple left for their home in Virginia. They raised a family of seven children. The couple returned to the capital in 1861. John Tyler was commissioned to chair a peace-brokering deal to avert the American Civil War. His proposals were rejected by the US Congress. Tyler suggested a peaceful cessation of the Confederate States would avoid the looming war.

Julia Gardiner Tyler visited the capital after the civil war ended, despite her husband’s support for the southern states. She became close friends with the wives of Presidents Andrew Johnson and Ulysses Grant.

Julia Tyler died of a stroke on July 10, 1889. She died at the Exchange Hotel at the age of 69. Her body was buried in Richmond next to her husband’s grave.

In 2009 Julia Tyler was idolized by US Treasury Department. The department issued a gold coin in her honor. Her journals are kept in the custody of the College of William and Mary, a public research university in Virginia.