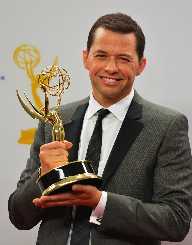 Jon Cryer was born on April 16th, in 1965. He is a famous America actor who has made appearances in both the film and in the TV industry. Also, at the beginning of his career, he made a couple of appearances on Broadway. During the 80s, she earned high acclaim for having featured in the hit film called Pretty in Pink. He later became an international movie star after featuring in Two and a Half Men, an American sitcom.

Jon Cryer was born Jonathan Niven Cryer on April 16th, 1965. His place of birth was in the New York City, New York. He was born to a family of actors as his mother and father played some roles in the film industry. His mother’s name was Gretchen Cryer. On the other hand, his father was called Donald David Cryer. Initially, his father had studied to pursue a career as a minister. This was strongly influenced by Rev. Dr. Donald W. Cryer who was Jon’s grandfather and that he was a famous minister in the church.

By the time Cryer clocked 12, he had already made up his mind on pursuing acting as his main career. At first, this was ridiculed by his mother who often told him that plumbing was a good career that he should have ventured into. During his teen years, Cryer enrolled with Stagedoor Manor, a school of performing arts. Later, in 1983, he graduated from the Bronx High School of Science. Due to his strong passion for acting, Cryer did not attend college. Rather, he opted to take the shortcut and went to study acting in the United Kingdom. This came as a surprise to his mother who was greatly disappointed.

Jon Cryer initially featured in Broadway while playing the role of David in Torch Song Trilogy -1983. At the time, he was to act as the replacement to Matthew Broderick for he resembled him. He turned to the film industry in 1984 with his debut appearance in No Small Affair. After featuring in two other films, i.e., Noon Wine and O.C. and Stiggs, he landed on a more important role in 1986. He was cast as Duckie in the film Pretty in Pink – 1986. This came as a massive success to Cryer’srising career. It brought him nationwide recognition as his mother complained about the number of unknown girls that called asking for the young and famous Cryer.

With time, Jon Cryer landed on some roles both in the TV and in the film industry. However, they did not bring much fame as compared to his teenage role as Duckie. He, however, turned the tables around with his role in the American sitcom Two and a Half Men – 2003. Before this, he had been part of the audition to act in Friends. However, he was sidelined for reasons that his other roles conflicted with the time demands from Friends.

Cryer reprised his role in Two and a Half Men for the coming 12 seasons, and the show came to an end in 2015. His role earned him worldwide recognition for the hilarious role he played on the TV show.

Cryer wedded Sarah Trigger in 1999. Together, the couple was blessed with one child named Charlie Austin. They, however, went separate ways in 2004, and he married for the second time. In 2007, he tied the knot with Lisa Joyner. Lisa is also a celebrated TV personality and a talented actress. Two years later, the two adopted a daughter. They named their daughter Daisy.