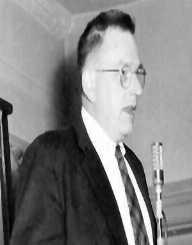 Born on June 8, 1910, John W. Campbell Jr. was an American science fiction writer and editor. He worked as the editor of Astounding Science Fiction, which was renamed Analogy Science Fiction and Fact from 1937 until his death. John W. Campbell became an accomplished fiction writer and is praised for his role in shaping the Golden Age of Science Fiction. John W. Campbell was acclaimed by Isaac Asimov as the "the most powerful force in science fiction ever, and for the first ten years of his editorship he dominated the field completely." John W. Campbell wrote fictions until he was appointed as the editor of Astounding. He worked under the pseudonyms, Don A. Stuart, Van Kampen and Arthur McCann. Campbell’s novella Who Goes There?Was made into the films, The Thing from Another World, 1951, The Thing, 1982 and The Thing in 2011.

John W. Campbell was born on June 8, 1910, in Newark, New Jersey to an electrical engineer father and Dorothy (née Strahern). He had his tertiary education at the Massachusetts Institute of Technology. While there, he made friends with the mathematician Norbert Wiener. At age 18, John W. Campbell  started writing and selling science fiction stories and six of his stories were published by Amazing from January 1930 to June 1931. They also published six of his letters and a novel. Even thoughCampbell became a popular writer, was dismissed from schoolbecause he failed German. John W. Campbell  then enrolled at the Duke University where he graduated with a Bachelor of Science in Physics in 1932.

John W. Campbell  started writing while in school and did some published works around that time. In January 1930, When the Atom Failed became his first published work as it cover-featured in Amazing Stories. This was followed by five more stories, which were published in the same year. The following year, Island of Space was also published. Astounding Stories also published his serial novel, The Mightiest Man from 1934 to 1935. In October 1936, his serial Uncertainty took the cover of Amazing Stories. Campbell’s work for Amazing cemented his credentials as an astute writer in the field of space adventure. John W. Campbell  wrote under the pseudonym, Don A. Stuart in 1934 and within that time wrote in different tones. Within this time, John W. Campbell  wrote stories like Twilight, 1934, Night, 1935 and Who Goes There? 1938 all for Astounding. Who Goes There? was adapted into films like The Thing from Another World, 1951, The Thing, 1982 and The Thing in 2011. Campbell was appointed the editor of Astounding and took over in October 1937.