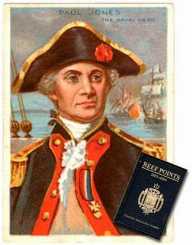 The United States of America has had several commanders, but focusing on the naval commanders, one of the famous during the Revolution is John Paul Jones. Call him controversial, he created friends and enemies for himself doing his national duties. John Paul Jones well known as John Paul was born on July 6, 1747. He was a US naval commander in the American Revolutionary War. Most of his critics accused him of piracy during his duties in the British water at the Revolution time. His actions, judgements and other things gained him international fame till date and he is referred to as the Father of the American Navy. He also joined the Imperial Russian Navy and obtained the rank rear admiral.

John Paul Jones was born to John Paul Sr. and Jean McDuff in Arbigland, Scotland. Paul had an early career in maritime as an apprentice aboard Friendship at age 13. Working under Captain Benson his first sailing was from Whitehaven in the northern county of Cumberland. He continued to sail aboard a British merchant as well as slave ships and acted as the third mate of King George, 1764 and as first mate on board the vessel Two friends in 1766. He worked with Two friends till 1768 when he abandoned his position on dock in Jamaica. John Paul was later aboard the brig John when he returned to Scotland the same year.

An unfortunate incident happened on the brig John when the Captain and ranking mate died of yellow fever, and John Paul Jones was able to navigate the ship to safe land. The owner of the vessel expressed his gratitude to him by making him the master of the ship. John Paul led the ship on two voyages to the West Indies, but the second came with a lot of controversies and dissatisfactions with his attitude towards one sailor who was a carpenter.

John Paul Jones mercilessly flogged the sailor who later died some weeks later; this got him in the hands of the law. John Paul was charged for the sailor’s death and imprisoned in Kirkcudbright Tollbooth, but later released on bail. The incident had a dent on his reputation which forced him to leave Scotland. John Paul was never left without controversies as he also killed a mutineer crew member, Blankson with a sword in an act he calls, self-defense. The two were disputing over wages when Paul killed him. He escaped trial by fleeing to Fredericksburg, Province of Virginia without his fortunes. This was when he added Jones to his name to hide his identity from the law enforcement agencies. Whiles, there he joined the American Navy to fight Britain.


The career in the Navy

John Paul Jones joined the Continental Navy in 1775 after the recommendations of Richard Henry Lee at a time captains were in high demand by the Navy and Marines. He was on December 7, 1775, appointed the 1st Lieutenant of the 24-gun frigate USS Alfred in the Continental Navy. His first cruise was in February 1776 aboard Alfred on the Delaware River; on this, he made the maiden flag hoist on a naval vessel using the Grand Union Flag.

The fleet bound to cruise along the coast was, however, ordered to sail for The Bahamas by Commodore Esek Hopkins and attacked Nassau to ensure smooth military supplies but had a disastrous encounter with a British packet ship before their return. On Commodore Hopkins command in November 1776, John Paul aboard Alfred was sent to set free American prisoners who were laboring in a coal mine in Nova Scotia. The assignment ended without the prisoners being freed, but they were able to seize the vessel Mellish, which was to supply winter clothing General John Burgoyne’s troops in Canada.

John Paul Jones also commanded the USS Ranger on June 14, 1777. The Ranger destroyed settlements causing high damages, especially in Whitehaven. The crews aboard the ship were involved in several acts for profits and at a time it seemed they were on a private ship and not a warship. John Paul once again led Ranger to attack the British Drake after a first failed attempt. After an hour gun battle, they were able to finally seize Drake which also resulted in the death of a British captain.

John Paul, accused his second in command, Lieutenant Simpson of wrongdoing and filed for court martial of Simpson while detaining him on the ship when they returned. The capture of Drake was one of the highest feat achieved by the US Navy during the revolution. He later took command of the 42-gun USS Bonhomme Richard in 1779 which was involved in the Battle of Flamborough Head, East Yorkshire.

John Paul Jones was later in 1787 engaged in the Empress Catherine II of Russia. This was after he felt redundant when his appointment to command the 74-gun USS American had failed. He was given a France subject name ???????????? (Pavel de Zhoves, Paul de Jones). There he was involved in the campaign in the Dnieper-Bug Linan against the Turks as a rear admiral aboard the 24-gun flagship Vladimir. Jones position in the navy then met several contentions while some ex-British naval officers in the Russian Navy also saw him as a traitor while his associate commander Nassar-Siegen felt jealous of his position.

The frictions went on for a while which made the Russian Commander Prince Gregory Potemkin recall John Paul Jones to St. Petersburg with the purpose of transferring him to the North Sea which never happened.  He once again became redundant. He was awarded the Order of St. Anne on June 8, 1788.

In 1789, John Paul Jones was arrested and accused of raping a 12-year-old girl named Katerina Goltzwart a situation believed to have been plotted by rival officers. However, a French representative in the Russian court, Count de Segur, made his personal findings and concluded that it was a plot against John Paul led by Prince de Nassau-Siegen for his own parochial interest. John Paul later admitted to frolicking the girl and paying her money. He left Russia in 1789 to Warsaw, Poland.

John Paul Jones left Warsaw to Paris in 1790 and tried to rejoin the Russian Navy but failed. He was then appointed by the US Consul in June 1792 to negotiate with the Dey of Algier so that American captives could be released. John Paul was however found dead on July 18, 1792, in his apartment. The cause of death was later found to be interstitial and was buried in Paris at the Saint Louis Cemetery nephritis.

His body was exhumed and returned to the United States aboard the USS Brooklyn (CA-3) on April 7, 1905, after an extensive search led by the US Ambassador to France Gen. Horace Porter. John Paul Jones' coffin was later mounted in Bancroft Hall at the United State Naval Academy, Annapolis Maryland on April 24, 1906. Seven years on, he was re-buried in a bronze and marble coffin at the Academy.