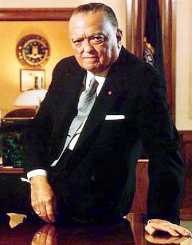 John Edgar Hoover, often called Mr. Director, was the first Director of the Federal Bureau of Investigation. Seen by many Americans as a hero, Hoover played a key role in founding the FBI. Some people, however, call him the devil who spied on people using illegal tactics.

J. Edgar Hoover introduced modern techniques of intelligence acquisition and an agent recruiting process that only the best could qualify. He received a lot of fame for his fight against gangster clans.

He remained the director of FBI for 48 years, until his death. This long period gave him extraordinary power and control over the political figures. Hoover was a master blackmailer. Even the Presidents feared him due to the political damage he could cause them.

J. Edgar Hoover’s fame was tainted in his later life and after his death. He was criticized for misusing FBI to collect secret files of famous people using unconstitutional methods. His anti-communist and anti-subversive views also contributed to his harsh criticism.

Born on January 1, 1895, in Washington D.C. to Anna Marie and Dickerson Naylor Hoover, John Edgar Hoover was very close to his mother.

He stuttered as a child. But that did not stop him from competing on the debate team. He overcame his problem by talking fast, a tactic he followed throughout his life.

As a boy, he attended the Central High School in the Washington Capitol Hill neighborhood. He joined the Reserve Officers’ Training Corps program there.

Despite his stuttering problem, Hoover actively participated in debates and gained a reputation.

J. Edgar Hoover began his career well before graduating. He worked for the Library of Congress in 1913, at only 18 years of age. As a messenger for the orders department, his work included collating information. He credited this job for his success at the FBI, later in his life.

At the Department of Justice

In 1917, immediately after completing his LLM degree, J. Edgar Hoover took a job in the alien registration section of the Department of Justice. While at this job, he monitored radical activities and developed anti-subversive views that stuck with him his entire life.

J. Edgar Hoover rose through the ranks and in 1919, he was the Man in charge of the “Palmer Raids.” Although it was revealed that the agency abused its power, Hoover’s reputation was not affected. Instead, the attorney general A. Palmer received the blame for the extremities.

The year 1921 saw J. Edgar Hoover become the Deputy Head of the Bureau of Investigation. Three years later, he became the Director.

J. Edgar Hoover maintained strict control over the BOI and its agents. He disrupted the career progress of other agents, who he thought was gaining popularity such as Melvin Purvis. Often he would fire agents on a whim, citing reasons like unqualified for the job. The decisions were purely in Hoover’s interests.

BOI made significant progress under Hoover’s leadership. Its image of being an incapable organization reversed. Hoover also made the recruiting process very strict, such that, only those who passed all tests would become agents. This brought a sense of “Elite” into the job description. An agent was called the “G-Man,” distinctively special!

As the Director Of FBI

In 1935, the BOI became the Federal Bureau of Investigation, with more powers than ever. Without a doubt, Hoover played a key role in the founding of the FBI.

By that time, J. Edgar Hoover had successfully introduced modern scientific methods of evidence gathering with the help of forensic laboratories and investigation techniques such as the centralized fingerprint file.

J. Edgar Hoover gained popularity and public recognition from his restless chase of the gangster clans and lords such as John Dillinger.

Due to these efforts, Crime Syndicates began shutting down, and Hoover made sure to be in the limelight. Public Confidence in the FBI and Hoover began to rise exponentially.

J. Edgar Hoover was strongly opposed to radical and subversive organizations. He instructed agents to keep tabs on government officials, to prevent foreign infiltration. The methods involved were often illegal, such as wire-tapping, infiltration, burglary, etc. In disguise, he secretly monitored what “he” considered to be wrong.

He went long lengths to discredit and tarnish the image of Martin Luther King. Leaking details of King’s sex life was one of the tactics he employed.

J. Edgar Hoover was especially annoyed at the communists for their political opinions. He created the COINTELPRO, a counterintelligence program that targeted the Communist Party and its members.

Once again, unconstitutional methods were used to collect information. He even used the tactic of spreading false rumors to discredit an individual or an organization. The Black Panthers, the Ku Klux Klan, and the Socialist Workers Party were prime targets.

J. Edgar Hoover’s image from a hero changed to the worst public servant in the history of America, in the later years of his life. After his death, more truths about his abuse of power were uncovered. Even his personal life came under fire.

He received wide criticism for using the blackmail tactic. While he was busy gathering juicy details about private lives of Presidents and governors, crime rate began to rise in America. Focused on increasing his hold over politics, he failed to see this.

It was also revealed that much of the good work was done by other agents, for which J. Edgar Hoover hogged the limelight. In fact, he had connections with organized criminals.

There also has been wide speculation about J. Edgar Hoover’s sexual desires. While he was linked with women such as Dorothy Lamour, some people believe that he was gay. There are claims that he was romantically involved with teenage boys. His strong opposition to homosexuality is said to be a veil to cover up his sexual inclinations.

J. Edgar Hoover died in 1972, at 77 years of age. The cause of death was a heart attack. He was still the director of FBI (48 years).  He spent almost all of his life in Washington, D.C. and was buried there after his death.

J. Edgar Hoover’s legacy lies in turning an organization tainted by scandals into a professional crime-fighting body. He introduced science into the field of evidence and intelligence acquisition.

He also made the FBI extremely powerful, organized and efficient. He also created the FBI National Academy.

His long reign at the FBI and unimaginable power that he acquired through spying into private affairs, made him a formidable force. Presidents were afraid of firing him. His abuses led the Congress to limit the tenure of future FBI directors to 10 years.

J. Edgar Hoover received two medals – the Public Welfare Medal in 1939 and the National Security Medal in 1955. He became an honorary knight in the Order of the British Empire in 1950.

He received a Distinguished Service Award from President Lyndon Johnson in 1966.

J. Edgar Hoover was fond of pets, particularly dogs. He was left-handed, and his star sign was Capricorn. He had three siblings, one brother, and two sisters. One of his sisters died as an infant.

J. Edgar Hoover led a bachelor’s life throughout his life. After his death, his relationship with Clyde Tolson, Associate Director of the FBI was highly publicized.

They were believed to be a gay couple by most of Washington D.C. Ironically enough, J. Edgar Hoover waged a long war against homosexuals while he was still alive.

It seems that the man who seemed to know the secret sex-life of everyone important in America had a private affair of his own. If that were true, he did well to hide it during his lifetime.