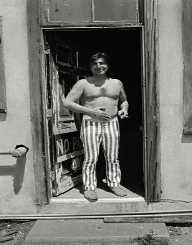 John Altoon was born on November 5, 1925, in Los Angeles. His parents were immigrants from Armenia. He began to attend the Otis Art Institute in 1947, from which he graduated in 1949. At the same time, he also attended the Art Center College of Design in Los Angeles. In 1950, Altoon joined the Chouinard Art Institute.

During the 1950s and 1960s, John Altoon became a prominent figure in the Los Angeles art scene. His work was exhibited in several museums, including the Museum of Contemporary Art in San Diego, Whitney Museum of American Art, Corcoran Gallery in Washington D.C. and many others.

The Abstract Expressionism Movement majorly influenced Altoon's art. In the 1960s, John Altoon was best known for his figurative drawings. He became a member of the Ferus Group, a group of artists who were associated with the Ferus Gallery in Los Angeles.

During his years in association with Ferus Gallery, John Altoon worked on the Ocean Park series, depicting the area around Venice and Santa Monica beaches in California. The series consisted of 18 paintings and several drawings.

In 1959, John Altoon married to actress Fay Spain, but the couple divorced in 1962. In 1966, he got married for the second tie to Roberta Lunine and remained married with her until his death.

In late 1930s, John Altoon was diagnosed with schizophrenia and during his life, suffered from periods of severe depression and paranoia. In 1960s, he became a patient of the prominent psychoanalyst Dr. Milton Wexler, who helped him to restore his ability to work. Altoon died I 1969 after suffering a massive heart attack.