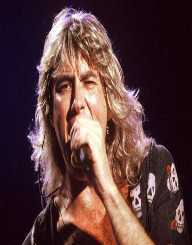 Joe Elliot is a songwriter and a musician best-known as a lead vocalist to a ‘1980s metal band known as, 'Def Leppard'. With the group, he became famous for songs such as, ‘Pour some sugar on me’ and ‘Love Bites.' He currently hosts a radio show on Planet Radio on Saturday nights.

Additionally, the group entailed a heavy yet melodic rock, with Elliot making his way as an integral part of the band, contributing to songwriting skills in rock and pop. He also plays the piano, electronic keyboard, guitar, and drums.

In 1979, Joe Elliot signed a contract with the Mercury-Polygram and produced ‘Getcha Rocks Off’ which earned them fame followed by ‘On Through The Night’ in 1980.A year later in 1981, they released ‘High N’ Dry’ produced by Mutt Lange.

As a member of the Def Leppard, he wrote pop and soft rock music for various music artists such as Led Zeppelin and Deep Purple. These band earned their fame in the early 1980s when they produced a hard rock song titled, ‘Bringin'’ On the Heartbreak.' Their remarkable performance was played on MTV, followed by ‘Photograph’ created in 1983.

Later in 1987, the band produced an album, ‘Hysteria’ which included two songs, ‘Pour Some Sugar on Me’ and ‘Love Bites’ which emerged #1 on Billboard’s Hot 100 List. The success followed other albums including, ‘Retro-Active’ in 1993 and ‘Vault’ in 1995.

In 1994, Joe Elliot recorded Mick Ronson's, ‘Heaven and Hull’ followed by Ron Wood’s ‘Slide on This’ and sung alongside Ian Hunter in, ‘   All the Young Dudes during the 1992 Freddie Mercury Tribute Concert which occurred at the Wembley Stadium. He has also participated on several other tributes including Alice Cooper’s tribute where he offered his vocals to, ‘Under My Wheels.'

In 1998, Elliot opened an American-style restaurant and bar called ‘players Café’ at Sheffield alongside Savage. The Def Leppard band is known as the most influential bands of the 1980s selling more than 100 million albums through its career.

Joe Elliot has participated on several tributes with artists such as Freddie Mercury where they performed ‘Tie Your Mother Down’ in 1992. He has worked on projects as the guitarist of ‘The Rolling stones’ solo album ‘Side on this,' ‘Those Faces’ by Lori Spree and ‘The Almighty’ by Ricky Warwick.

Elliot produced the Ricky Warwick’s, ‘Tattoos and Alibis’ in September 2003, through Sanctuary Records. Additionally, he sang vocals in the cover band titled, ‘Down ‘n’ Outz’ of the album ‘My ReGeneration Vol. 1.’

In 2012, Joe Elliot participated in the Rock N Roll All Stars, a tour that consisted of the most recognised rock performers. This band later came to be known as ‘Kings of Chaos’ and produced a cover song, ‘Never Before’ by Deep Purple,' followed by a series of EPs which featured various genres of music including; hard rock, alternative, and punk.

These tour of the band included song performances such as, ‘Guns N Roses,' ‘Deep Purple’ and ‘Skid Row’ with Elliot as the lead vocalist. Elliot has produced with the Down ‘n’ Outz band, ‘My ReGeneration’ in 2010 and ‘The Further Adventures of…’ in 2014.

Joe Elliot currently resides in Dublin where he has recording studio called ‘Joe Garage’ which he has used to record and produce for various artists. He also has another home in Los Angeles. Notably, he is a Sheffield United fan and has recorded and produced music for the Sheffield based film titled, ‘When Saturday Comes.’

From 1979-1988, Elliot dated Denise Dakin. He married Karla Ramdhani in 1989, but the couple separated in 1994, divorcing in 1996. After his divorce to Karla, Joe dated Bobbie Tolsma until 2003. On September 1, 2004, he married his second wife, Kristine and the couple has one child named Finlay born in December 2009. Unfortunately, he lost his father in death in July 2011 after suffering illness for several weeks.