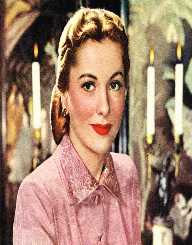 Popularly known as Joan Fontaine, Joan de Beauvoir de Havilland was a British-American actress. Born on October 22, 1917, Joan Fontaine is best known for her role roles in Hollywood films and played starred in 45 feature films. She was to fame after her role in Rebecca, 1940 directed by Alfred Hitchcock. This very movie got her a nomination for Best Actress for the Academy Award. Joan Fontaine was followed by Suspicion, 1941 which won her an Academy Award.

In 1978, she released her autobiography, No Bed of Roses after she has starred in her last feature film the Witches in 1966. She was married four times with one child and adopted another from Peru who she later separated from due to her own principles. She was also involved in radio, television and stage work later in her career.

Joan Fontaine was born on October 22, 1917, in Tokyo, Japan to Walter Augustus de Havilland and English professor and patent attorney. Fontaine’s childhood life was marred with ill health as she mostly suffered from anemia as a result of measles and streptococcal infection. Her mother moved her and another sister from Japan upon doctors’ advice. The family excluded his dad settled inSaratoga, California. Joan Fontaine has previously had some form of education in Japan. After having improved health in the US, Fontaine schooled at the Los Gatos High School. They once again returned to Japan when she turned 16, and there she schooled at the Japan School for Foreign Children. She later graduated in 1935.

Joan Fontaine started his career in acting as a stage actor in 1935. Her stage debut was in Call It a Day by West Coast Production. She later signed a contract with RKO pictures that same year and played a minor in films like No More Ladies, A Million to One and Quality Street. She later played a starring role in 1937 in The Man Who Found Himself. From a starring role, she then got a major role in A Damsel in Distress in 1937 alongside Fred Astaire. The film did not meet up to expectation and therefore became a flop. Fontaine’s contract with RKO was not renewed after expiration in 1939 because she failed to reach the mark. Her last movie with the company was The Woman same year. After her interaction producer David O. Selznick at a dinner, Joan Fontaine got a role in Rebecca, after going through some auditions.

The film was released in 1940, and Joan Fontaine made a strong impact on it. Her role gained her nomination as Best Actress for the Academy Award but lost it to Kitty Foyle. Joan Fontaine would later win the award the following year for her role in Suspicion. The 1940s were going to be a peak year for her since a decline was awaiting her in the next decade. She starred in films like The Constant Nymph, 1943, which also got her an Academy nomination, Jane Eyre, 1943, Ivy, 1947 and later in Letter from an Unknown Woman, 1948. Joan Fontaine declined sharply in the 1950’s and was forced to go back to stage works and television and radio theatre since film roles were not forthcoming. In 1954, he played in Tea and Sympathy which had positive reviews. In the 1940s, Joan Fontaine also did some radio shows for the Lux Theater.

Joan Fontaine film roles had lessened, so she played more in stage performances. She starred in plays like Private Lives, Cactus Flower and The Lion in Winter. In 1980 she was nominated for an Emmy Award for her performance in Ryan’s Hope. Two years before, he had released her autobiography No Bed of Roses. Joan Fontaine played her last television role in 1994 on the TV film Good King Wenceslas.

Joan Fontaine and her sister, Olivia de Havilland were not on good terms and their mother also favored Olivia the most. According to Joan Fontaine, her mother objected to her using the family name for acting which made her later invent Joan Fontaine. The situation heightened when both were nominated for an Academy Award in 1941. Joan Fontaine finally won, and rumors are that she refused to respond to glances and congratulations from her sister de Havilland. This got her offended and embarrassed. The tension between them became very serious that de Havilland did not invite Fontaine to their mothers funeral. Both of them give different accounts as to how this happened.

Joan Fontaine married and divorced four times. In 1939, she was married to actor Brian Aherne but divorced six years after. She then got married to actor William Dozier in 1946 and had a daughter, Deborah Leslie, in 1948. The couple divorced a year after the child was born. Her third marriage was to Collier Young in 1952 but once again divorced in 1960. In 1964 Joan Fontaine married to Alfred Wright, a golf editor and that one too lasted for five years. Fontaine adopted a Peruvian girl during a trip to a film festival in South American in 1951 but later disowned her on principle. This was because the girl refused to visit her biological parents at age 16 as promised by Joan Fontaine.

Joan Fontaine during the adoption process promised the girl’s parent; she would allow her to visit when she attains 16. However, the girl refused to embark on that visit which caused a fracas between them. Joan Fontaine held dual citizenship. She was a British citizen by birth and got American citizenship in 1943. She died on December 15, 2013, in her Carmel Highlands home at age 96. He was cremated.

Joan Fontaine was nominated three times for an academy award but won only one with the film Suspicions in 1941. She also got a nomination for an Emmy Award but lost out on that. In 1965, she honoured a star on the Hollywood Walk of Fame. Also in 1942, has left her hand and footprint at the Grauman’s Chinese Theater