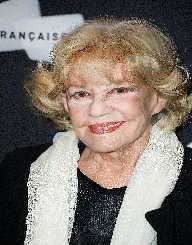 Jeanne Moreau was born on January 23rd, in 1928. She was a notable French actress. Aside from acting, she was also a talented singer, director, and a screenwriter. In a successful career spanning for several decades, Moreau featured in over 100 films. As such, she bagged home awards such as Cannes Film Festival Award, BAFTA Award, and the Cesar Award.

Jeanne Moreau was born on January 23rd, in 1928. Her place of birth was in Paris. She was the daughter of Katherine and Anatole Moreau. Her mother was a professional dancer whereas her father ran a restaurant business.

Jeanne Moreau's acting career began in theatre in 1947. Her first performance was at the Avignon Festival. Later, she also featured in a play dubbed A Month in the Country. By the time she clocked 20, Moreau was among the best actresses in the theatre industry.

Jeanne Moreau earned herself several awards in her film career. Some of these awards that she bagged home include Cesar Awards, BAFTA Awards, and European Film Award.

Jeanne Moreau wedded Jean-Louis Richard in 1949. The two separated in 1951 before finalizing their divorce in 1964. She was married for the second time to Thodoros Roubanis in 1966 and later to William Friedkin in 1977.