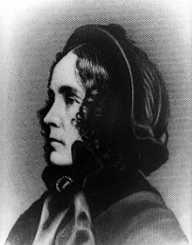 Jane Means Appleton Pierce was the wife of United States President Franklin Pierce. Born on March 12, 1806, she served as the First Lady of the U.S. from 1853 to 1857. Jane was a melancholy who wanted to live a private life. She detested her Franklin political ambition and subsequently blamed the death of all their three sons on his involvement in politics.

Jane Means Appleton Pierce was born on March 12, 1806, in Hampton, New Hampshire, to Rev Jesse Appleton and Elizabeth Means-Appleton. She was the third child of six by her parents. Her father was a congressional minister. Also, he served as president of Bowdoin College. Jane was born a melancholy. She was very shy, frail, and little. After the death of her father, she moved to live with her maternal grandparents in Amherst. She was 13 years at the time. Jane received education at Keene, New Hampshire. It was during this period that she discovered her passion for literature. Growing up, Jane became susceptible to depression. As such, she became heavily dependent on others. Her aunt Abigail Kent Means and her older sister, Mary Appleton Aiken became her solace.

On November 19, 1834, Franklin Pierce and Jane married at Jane grandparents’ home in Amherst. Franklin was a young lawyer with political ambitions; therefore, Jane’s family initially opposed the marriage. Following their relatively small marriage ceremony, the couple went on a six-day honeymoon at the boarding house of Sophia Southurt near Washington, D.C.

Prior to their marriage, Franklin was serving in the U.S. House of Representatives. In 1837, he became a U.S. Senator.

In 1836, the couple welcomed their first son, Franklin Jr. however; he died just three days after birth. Jane had to become a political wife, something she never wished for. Being shy by nature, the last thing she wanted was appearing in crowd. Not so pleased with life in New York, Jane managed to convince Franklin to resign from the Senate. He ultimately gave in to Jane’s pressure, and the couple subsequently returned to Hampshire in 1842.

Jane would later blame her husband’s involvement in politics for all her predicaments including the death of her first child. Their second child Franklin "Frank" Robert Pierce born in 1839, also died in 1843, from epidemic typhus. The death of Frank further depressed Jane and came with some health complications.

Franklin served in the Mexican-American War, attaining the rank of Brigadier General. This feat gained him support and became a local hero. President James K. Polk appointed Franklin as U.S. Attorney General in 1848. However, Jane forced him to turn the offer down, which he did. Subsequently, he also had to turn down an opportunity return to Senate or to become Governor of New Hampshire.

However, in 1852, the Democratic Party selected Franklin Pierce as their presidential candidate. Upon hearing the news, Jane passed out. Jane strongly opposed Franklin’s ran for president. She just wanted to live a private life free from the public inquisitions. Franklin ultimately won elections to become the President of the United States. Jane, therefore, became the First Lady of the United States.

Death Of The Third Son

On April 13, 1841, Jane gave birth to her third son, Benjamin Pierce. Just like the first two children, Benjamin also died. January 16, 1853, the family were traveling by train from Andover, Massachusetts to Concord, New Hampshire, for a friend’s funeral when their passenger car broke away from the train. The car rolled down an embankment killing Benjamin. After the death of her third child, Jane believed that God opposed her husband’s involvement in politics.

First Lady of the US

Jane boycotted the March 4, 1853, inauguration of Franklin Pierce. She ensured that she had nothing to do with her husband’s presidency. She became depressed and never recovered from losing all of her three children. Jane remained in the upstairs living quarters of the White House for almost two years. Throughout this period, all she did was writing letters to her deceased child. Her aunt Abby Kent-Means, and close friend Verina Davis, therefore, performed all her social duties. Varina was the wife of War Secretary Jefferson Davis.

Jane’s first official appearance as First Lady was at the 1855 New Year's Day reception. Following that event, she periodically served White House hostess until her Franklin ended his term of office in 1857.

Jane Pierce died on December 2, 1863, from Tuberculosis. She was interred at Old North Cemetery in Concord, New Hampshire.