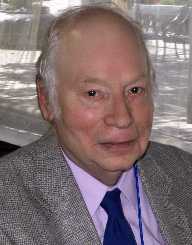 James Rainwater was an American physicist and a Nobel Prize in Physics winner. Born on December 9, 1917, he shared the Prize with Bohr and Mottelson in 1975, "for the discovery of the connection between collective motion and particle motion in atomic nuclei and the development of the theory of the structure of the atomic nucleus based on this connection" James Rainwater joined the Manhattan Project that developed the first atomic bomb during the World War II. After the war, James Rainwater started investigating into atomic nuclei and contrary to what was believed at the time postulated that not atomic nuclei are spherical in 1949. His hypothesis was worked on and experimentally confirmed byBen Mottelson and Aage Bohr.

After obtaining his degree,  James Rainwater joined the Columbia University for his postgraduate studies. While there, he studied under Enrico Fermi, Isidor Isaac Rabi, John R. Dunning and Edward Teller. Each of the physicists was renowned in their own why as Fermi was into neutron moderator studied which led to the construction of the first nuclear reactor. Eugene T. Booth and Dunning also built the first cyclotron in Columbia, in the basement of the Pupin Physics Laboratories. In 1941,  James Rainwater received his Master of Arts from the University and continued with his Doctor of Philosophy. His thesis was on "Neutron beam spectrometer studies of boron, cadmium, and the energy distribution from paraffin," of which he built a neutron spectrometer and developed a technique for its use.

At Columbia Rainwater joined the Manhattan Project’s Substitute Alloy Materials (SAM) Laboratories. The project was an effort by the Allied to develop an atomic bomb during the World War II. The primary aim of the SAM Laboratories was to develop gaseous diffusion technology for uranium enrichment to be used in the production of fissile uranium-235 for atomic bombs. During this period, he collaborated with Chien-Shiung Wu and William W. Havens, Jr on the study of neutron cross section by using the neutron spectrometer. James Rainwater was awarded his doctorate after the war in 1946. In recognition for his work in Manhattan,  James Rainwater received the Ernest Orlando Lawrence Award from the United States Atomic Energy Commission in 1963.

Academic Work And Others

After the Manhattan Project,  James Rainwater remained as an instructor at the Columbia University and started teaching subjects on the nuclear structure in 1948. Niels Bohr and John Wheeler had in 1939 came up with the theoretical treatment for nuclear fission with the use of liquid drop model of the nucleus, but this became out-dated with Maria Goesppert Mayer’s nuclear shell model in 1949. As the model also had its own limitations, Charles H. Townes in his experiments found quadrupole moments greater than those indicated by the shell model which he reported at a colloquium at Columbia in 1949. James Rainwater came up with the idea that, the disparities between the liquid drop and nuclear shell models could be solved if the atomic nucleus were not spherical.

James Rainwater went on to publish a theoretical paper on the subject in 1950. Aage Bohr who at the time shared an office with Rainwater embarked on an experiment to verify Rainwater’s claim. Bohr worked with Ben Mottelson and in 1952 and 1953, published papers to confirm the theory. In 1950,  James Rainwater built a synchrotron at the Nevis Laboratories with funding from the Office of Naval Research. In 1952,  James Rainwater became a full professor and from 1951 to 1954, became the director of Nevis Laboratories, which he again served from 1957 to 1961.  James Rainwater shared the Nobel Prize in Physics with Bohr and Mottelson in 1975. In 1983, he became a Michael I. Pupin Professor of Physics at Columbia.

In March 1942, J James Rainwater married Emma Louise Smith. The couple had four children including three sons, James, Robert and William and a daughter Elizabeth Ann who died at age nine of leukemia. He died on February 31, 1986, of cardiopulmonary arrest at St. John's Riverside Hospital in Yonkers, New York.