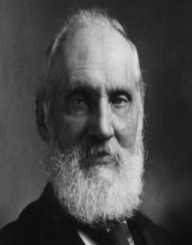 James Prescott Joule
James Prescott Joule was an English Physicist who studied the nature of heat and discovered its relationship to mechanical work. This study led him to discover ‘The law of Conservation of energy,’ which states that energy can neither be created nor destroyed. It is transferred from one form to another. This has led to the first law of Thermodynamics.

James Prescott Joule was born on 24 Dec 1818 in Manchester, England. His parents were Benjamin Joule and Alice Prescott. His father was a wealthy brewer.

James Prescott Joule was a delicate child and did not attend regular school. He was taught at home by his aunt. He was fascinated with electricity and its effects. He and his brother conducted experiments at home giving shocks to each other and the servants.

James Prescott Joule's father’s health deteriorated, and James at 15 had to join his brother to help in the brewery. He received education from the famous English Chemist John Dalton.

Working in the brewery, James Prescott Joule started to investigate the idea of replacing steam engines with the newly invented electric motor. His inquiry was motivated both by economic and scientific reasons. He constructed an electromagnetic engine at the age of 19.

In 1840 James published his first paper on William Sturgeon’s Annals of Electricity. In 1841 he framed the first Joule’s law which states “The heat which is evolved by the proper action of any voltaic current is proportional to the square of the intensity of that current multiplied by the resistance to conduction which it experiences.”

James Prescott Joule's findings were not accepted immediately, yet he continued undaunted with his work. Further experiments and measurements with his electric motor led Joule to estimate the mechanical equivalent of heat as 4.1868 joules per calorie of work to raise the temperature of one pound of water by one degree Fahrenheit.

Later in 1850, Joule published a refined measurement of 4.159 J/cal, closer to the twentieth century’s estimates.

In 1847 James Prescott Joule met William Thompson (who later became Lord Kelvin) and worked with his collaboration to conduct thermal effects. Jointly they discovered the Joule Thompson effect and absolute scale of temperature.

Kinetics is a science of motion. James Prescott Joule perceived the relationship between his discoveries and kinetic energy of heat. Joule believed heat to be a form of rotational rather than translational movement.

Being a student of Dalton Joule had a firm belief in the atomic theory. The existence of atoms and molecules had still not been widely accepted.

James Prescott Joule received the Royal Medal of Royal Society for his published paper on ‘The Mechanical equivalent of Heat’.

James Prescott Joule received the Copley Medal in 1870 for his experimental research on ‘The dynamic theory of heat’.

In 1890 he received The Albert Medal of the Royal Society of Arts for establishing a relationship between heat, electricity and mechanical work.

James Prescott Joule was the President of Mancher Library & Philosophical Society (1860) and British Association for the Advancement of Sciences (1872, 1887). He was the honorary member of Institute of Engineers and Shipbuilders in Scotland (1857).

The S.I. Unit of energy and work ‘Joule’is named after him.

James Prescott Joule married Amelia Gripes in 1847. They had two sons and a daughter. His wife died in 1854 and his second son died three weeks after he was born in 1854. Joule spent the rest of his life as a widower involved in his work.

James Prescott Joule passed away in 1889 at home in Sale and was buried in Brook lands cemetery. The gravestone is inscribed with the number “772.55” his climacteric 1878 measurement of the mechanical equivalent of heat.

A memorial was built in the north choir of West Minster Abbey. A statue is there at Manchester Hall.