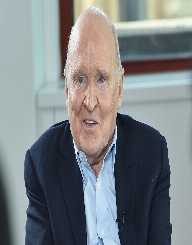 Jack Welch was born on November 19, 1935. He is a businessman. He was the chairman and CEO of General Electric for twenty years. Jack Welch is also a chemical engineer. He is currently a retired businessman.

Jack Welch was born on November 19, 1935, in Massachusetts, United States. He was born to John Welch who was a railroad conductor and Grace who was a housewife. He was born as an only child. He was interested in business from a very young age. During summer he worked as a shoe salesman, golf caddy, and a newspaper boy. He attended Salem High School. In school, he was an athlete and played other games such as football, hockey, and baseball.

Jack Welch led the production and marketing of Lexan and Noryl. In 1971, he became the Vice President of General Electric’s metallurgical and chemical divisions. He was a good manager since he knew a chemical engineer and a businessman. In 1973, he became the head of strategic planning for General Electric. At his position, he managed a $2 billion portfolio of businesses. In 1977, was appointed the Vice President and Head of Consumer Products and Services Division.

In 1979, Jack Welch became the Vice Chairman of the said Division. In 1981, he became General Electric’s youngest Chairman and CEO.  He was so strict as a CEO that he could fire employees to his liking. He was also so harsh on his employees, but he had good management skills that led to the growth of the company. He introduced the Rank and Yank policy which became popular and other companies also started using it. He served as the CEO of the company until he retired in 2001. He was hailed as one of the greatest business leaders in the United States. He has also written books on management and leadership. One of his books includes ‘Winning’ which he co-wrote with his wife.

In 1999, Jack Welch was named the Manager of the Century. His book ‘Winning’ became Number one on the Wall Street Journal Bestseller list.

In 1959, Jack Welch married Carolyn Osburn with whom he had four children. The couple divorced in 1987. In 1989, he married his second wife Jane Beasley who was a lawyer. In 2003, he got divorced from Jane due to his affair with Suzy Wetlaufer. In 2004, he married Suzy Wetlaufer.