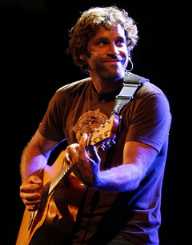 Jack Johnson is an American singer and songwriter. He is best known for his mellow-style music on the soundtrack of the Curious George movie.

Jack Johnson was born on May 18, 1975, in Oahu, Hawaii.  His father, professional surfer Jeff Johnson, taught Jack and his brothers who to surf. He took up the guitar when he was in his teens. As a teenager, Johnson was a competitive surfer.  He quit after a surfing accident.

Jack Johnson attended University of California: Santa Barbara where he graduated with a degree in film.  However, his love of music led him to try his success in making music.

Jack Johnson music career started when he wrote songs for the 2000 cult hit surfer movie Thicker Than Water.  It was just the beginning of the interest from music labels and tours that followed. His first album Brushfire Fairytales was a big hit in 2001, but he gained even more success in 2006 with the film soundtrack for the animated movie Curious George.  Altogether, Johnson has recorded six solo albums.

Jack Johnson married his wife Kim on July 22, 2000.  The couple has two sons and one daughter.  The family lives in Oahu.

Jack Johnson and his wife Kim founded the Johnson Ohana Foundation.  In 2008, 100% of the profits from his world tour went to support environmental, art, and music education.

The organization also works with community groups that sustain local food systems and projects that focus on plastic free initiatives. The organization has donated over $4 million in direct and matching donations.

The year 2006 was a good year for Jack Johnson regarding awards.  He earned two Grammy Award nominations including Best Male Pop Vocal Performance and Best Pop Collaboration with Vocals.

Thicker Than Water, 2000
Sing-a-Longs and Lullabies for the Film Curious George, 2006