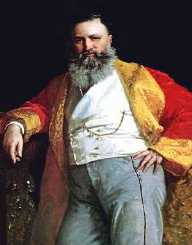 Isaac Singer was an American mechanical inventor credited for his production of the first domestic sewing machine.

Isaac Merritt Singer was born on October 27, 1811, in Pittstown New York, USA. He was the son of Adam and Ruth Singer. His parents were of mixed German and Jewish ancestry. He had other five siblings. He grew up in Oswego, New York. He received little formal education. In 1822, his parents divorced. Singer stayed for a year with his mother. In 1823, he ran away and started doing odd jobs to earn a living.

He tried being a mechanic but abandoned his quest for acting. He founded a traveling theatre group in the hope of being an actor. The group Merritt Players toured the US for nine years. Singer made little money from the tours and eventually disbanded the group. In his five years with the group, Singer had several children by different women.

In 1830, he returned to his mechanic apprenticeship. In 1839, at the age of 28, Singer made a mechanical rock drilling machine. He patented his design in the same year. He continued with his quest to invent more machines. In 1849, he designed another mechanical device. Singer made a wood carving machine. He improved the machine to include metal carving properties. He got a financier and visited several places on his working schedule.

In 1851, he was working in Boston. He made improvements on an old Lerow and Blodgett sewing machine. Within 11 days, he made up a new more efficient machine. He patented the new machine under his company’s name. Singer was sued for copyright infringement. In 1854, Elias Howe won a court case against him. Howe was awarded libel damages.

In June 1851, Singer formed a legal partnership with a New York attorney, Edward Clark. The new sewing machine was designed to work for the big shoemaking and textile factories. Singer and his partner agreed to target American households. They made smaller versions of the machine to be used in average households. In 1856, they became the first Americans to go into mass production of the home sewing machine. Singer sold more units of the smaller domestic version. Thus he scaled down on the production of the factory version.

He opened production factories in the US and Britain. Singer improved his sewing machines 12 more times. In total, he made 20 patents on the sewing machine. He patented all the improvements under his name. In 1860, the Singer sewing machine was a household name in the US.

He got a fortune over the sale of the sewing machine. Like before, Singer engaged in a lavish lifestyle. He had extra affairs with other women. Though he depicted a bad image for a company head, Singer continued to sell his invention to the average American housewives.

In his life, singer fathered 24 children with five different women. Of the 24, only two were by his wife. He made a marital settlement to his wife Catherine while in London. Though the court declined to grant a divorce, Catherine went on to remarry.

Singer retired to England. In 1863 he agreed to disband the company. He continued operating the company under a new name The Singer Manufacturing Company.

With the fortune he had, singer bought a mansion in Devon, England. He renovated the old estate to mirror the medieval French and English architecture. By the time of his death, Singer is believed to have amassed a fortune of almost USD 13 million.

Isaac Singer died on July 23, 1875, while in Devon, Britain. He was buried at the Torquay cemetery in Devon.

As a mechanic, Singer proved to be genius in his inventions. He created highly reliable mechanical machines with little formal education. He, however, faltered on the family issues. He fathered so many children with different women. Singer redeemed himself by managing to cater to all of his children, through his vast fortune and estate.

Some of his children returned to the US and continued with the family business. Others stayed in England, while others went to France. The singer joined the nobility families in Europe by marriage.