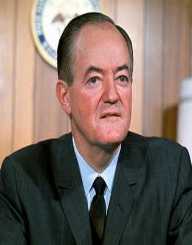 American politician Hubert Humphrey was born on the 27 May 1911 in Wallace, South Dakota. He was the son of Hubert H Humphrey Sr. and Christine Sannes. His father was a pharmacist and ran a drugstore.

Initially, Humphrey studied pharmacy and worked in his father’s drugstore. He then enrolled at the University of Minnesota, Minneapolis where he obtained a B.A. degree (1939). He did graduate work at the Louisiana State University.

After obtaining his degree, Hubert Humphrey worked as a teacher and a radio commentator. Then in 1944 he became involved in politics when he was appointed the Minnesota campaign manager for U.S. President Franklin D Roosevelt. He was also involved in the merging of the Farmer-Labor and Democratic parties.

In 1943 Humphrey ran unsuccessfully to be mayor of Minneapolis. When he ran again in 1945, he won office.

During 1948 at the Democratic National Convention Hubert Humphrey was one of the leaders encouraging a stronger civil rights agenda for the presidential platform but was defeated. He was elected to the US Senate in 1948 and held his seat for sixteen years. He ran for two failed presidential campaigns in the Democratic primaries of 1952 and 1960. In 1961 Humphrey became assistant majority leader. After the Kennedy assassination in 1963, when Lyndon B Johnson took office, he chose Humphrey to be his running mate.

He subsequently became the 38th Vice President of the United States under President Lyndon B. Johnson from 1965 to 1969. As vice-president, he adopted a more conservative approach, including defending America’s involvement in the Vietnam War. He was chairman of the National Advisory Council of the Peace Corps, coordinator of the anti-poverty programme and chairman of the Civil Rights Council. Humphrey was involved in the passing of the Voting Rights Act as well as Medicare.

After Johnson withdrew from the 1968 presidential election, Hubert Humphrey put his name forward for the Democratic nomination. He won the nomination at the Democratic convention in Chicago. Initially trailing badly behind Richard Nixon, by the end of the 1968 election campaign, he lost by one of the narrowest margins in U.S. electoral history.

He was elected to the Senate in 1970 and had a run for the Democratic nomination for president in 1972 but was not successful.

Humphrey had a reputation as an efficient and effective debater and senator. He was admired for the bipartisan support he won for the Nuclear-Test-Ban Treaty (1963) as well as the Civil Rights Act (1964).

Hubert Humphrey returned to teaching and was also revered as an elder statesman.

His autobiography The Education of a Public Man: My Life and Politics was published in 1976.

Hubert Humphrey married Muriel Brown in 1936, and the couple remained together until his death. Hubert Humphrey died on the 13 January 1978 in Waverly, Minnesota.