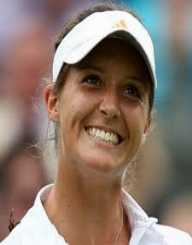 Helen Wills Moody was an American tennis player who won 19 Grand Slam titles in her career.

Helen Wills Moody was born as Helen Newington Wills on October 6, 1905, in California, USA. She grew up as the only child to well off parents. Her father was a medical surgeon. She started playing tennis before attending formal school.

Moody was homeschooled by her mother in her formative years. She debuted at a formal school at the age of 8. Graduating from Anna Head School, she went to the University of California, Berkeley. Moody graduated in 1925.

Helen Wills Moody started playing tennis in 1913. Her father bought her a tennis racket and encouraged her to practice. She was initially reluctant to take up the sport. Moody got interested after watching her favorite players during a charity match in California.

She briefly moved with her family to Vermont in 1917. Two years later in 1919, the family moved back to Berkeley, California. She enlisted in the Berkeley Tennis Club. She trained under Coach William Fuller. She enhanced her training in 1920 under Coach Hazel Wightman.

In 1921 Helen Wills Moody competed in her first tennis tournament at the age of 15. She won the USA girl’s singles open championship. She won the girls title again in 1922. In 1923, she won the national women’s singles tournament against the defending champion Molla Mallory. Moody became the youngest competitor to win the title.

In a highly publicized match, Helen Wills Moody met Suzanne Lenglen in Wimbledon. On February 16, 1926, she played against the 27-year-old six-time Wimbledon champion on British soil. Several high profile dignitaries including foreign royalty packed the terraces. Moody lost the match in two sets. She called for a rematch, but Lenglen did not give in.

She had a string of loses from 1923 to 1924. She unprecedentedly lost four matches in three years. Moody took time off to heal from her appendix operation. In 1927 she made a comeback in Wimbledon. Moody became the first American to win the Wimbledon title since the 1905 win by May Sutton. She maintained her winning run until 1933. Moody posted a record of eight titles in Wimbledon. It was broken by fellow American Martina Navratilova in 1990. In her career, she won 398 matches against 35 defeats.

In the women’s doubles tournament, she cumulatively won twelve US, French and Wimbledon Tournaments. She had a long-standing rivalry with her fellow American Helen Hull Jacobs.

Helen Wills Moody was nicknamed the Little Miss Poker Face by her colleagues. She took every match as a battle. Moody played any match like a final. She was witty and highly skillful.

She had good anticipation of where the ball would swerve. Moody had a strong serve, overhead, and backhand. She preferred shorter skirts which gave her more flexibility and mobility on the court.

Helen Wills Moody got married twice. She first got married to stockbroker Frederick Moody in 1929. They divorced in 1937. In October 1939, she married polo player Aidan Roark. She never had any children with her two husbands.

Apart from tennis, Moody loved to draw and paint. She exhibited her artwork in several galleries in the US.

She wrote some books on her life on the tennis court. In 1928 she published the book Tennis. In 1937 she released her second book titled Fifteen Thirty. Later in 1939, she published her third book Death Serves an Ace.

In 1935 Helen Wills Moody was named as the Female Athlete of the Year. In 1959, she became the International Tennis Hall of Fame inductee. In 1996, she became an inductee into the Women’s Hall of Fame of the Intercollegiate Tennis Association.

Helen Wills Moody died on January 1, 1998, aged 92 years in California, USA. She changed the way women’s tennis was played. She injected the competitive edge that was only seen in the men’s tournaments.