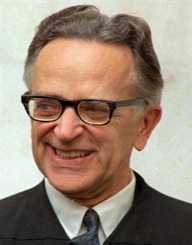 Harry Andrew Blackmun was an American lawyer and jurist. Born on November 12, 1908, President Richard Nixon appointed him as an Associate Justice of the United States Supreme Court, serving from 1970 to 1994. He is the author of the Court’s opinion in Roe v. Wade bars the restrictions on abortion by many state and federal. Blackmun started his law practice in Minneapolis, Minnesota.

In 1959, President Dwight D. Eisenhower appointed him to the Court of Appeals for the Eighth Circuit. He progressed to the Supreme Court during the admiration of President Nixon. Blackmun became one of the liberal justices the Supreme Court.

Harry Andrew Blackmun was born on November 12, 1908, in Nashville, Illinois to Corwin Manning Blackmun andTheo Huegely. His younger brother Corwin Manning Blackmun, Jr. died after birth, and he had his little sister born in 1917. He was in the same grade school as future colleague Supreme Court judge, Warren E. Burger. The two became excellent friends.

After graduating from Harvard, Harry Blackmun served as a law clerk in Minnesota. He also taught at the University of Minnesota Law School and William Mitchell College of Law. Blackmun initially focused his law practice on civil litigation, trusts and estate, and taxation.

He was an attorney of the now Dorsey & Whitney law firm. He was a resident counsel of the Mayo Clinic in Rochester, Minnesota from 1950 to 1959. He was encouraged by his friend Warren E. Burger, an appellate judge at the time to pursue judgeship. Upon further persuasion of Judge John B. Sanborn Jr. whom he worked under as a clerk, he accepted a nomination by President Dwight D. Eisenhower to be appointed to the Appeals Court.

OnSeptember 15, 1959, the United States Senate unanimously confirmed his nomination. Harry Blackmun authored about 217 opinions for the Eighth Circuit during over a decade career on the court.

Appointment to the Supreme Court

Nixon had previously nominated Clement Haynsworth and G. Harrold Carswell for the position but were all not approved by the Senate. Blackmun’s nomination was a recommendation of Warren Burger, then the Court’s Chief Justice. Being terrific friends, Blackmun and Warren Burger were known as the "Minnesota Twins."At the end of his career, he became the most liberal justice of the court.

Harry Blackmun retired from the court in August 1994. During his initial years on the Court, Blackmun mostly sided with Burger on most cases including dissenting from the Furman v. Georgia decision, invalidating capital punishment laws in the US. He gradually drifted from Burger, becoming liberal in his views. He became an advocate for equal rights, affirmative action, and the poor. He later reviewed his position on the death penalty by then opposing the measure.

Harry Blackmun authored the Court’s opinion in Roe v. Wade in 1973, which invalidated Texas move to make most forms of abortion a felony. Another related case, Doe v. Bolton, which held a less restraining Georgia law was also ruled as unconstitutional.

The ruling set the basis for the constitutional right to abortion for citizens in the United States. Blackmun who was viewed as conservative came under intense backlash from anti-abortion campaigners and received several threats. Blackmun, however, defied the norms and became an advocate for the right of abortion.

In 1941, Harry Blackmun married Dorothy Clark. The couple had three daughters Susan, Sally, and Nancy. Blackmun fell and broke his hip while home on February 22, 1999. The following day, he went for a hip replacement at Arlington Hospital.

However, Blackmun did not recover fully dying ten days later on March 4, 1999, from complications related to the procedure. He was 90 years. He was interred at the Arlington National Cemetery.