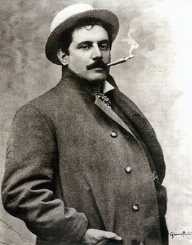 Giacomo Antonio Domenico Michele Secondo Maria Puccini was born on December 22, 1858, in Lucca, Tuscany. He was one of the nine children of his parents, who came from a very musical family. His family had held the position of maestro di cappella for 124 years, and Giacomo was supposed to occupy the position when he was old enough. However, his father died when Giacomo was just six years old, and he could not take over. Nevertheless, Giacomo participated in the church’s musical life, becoming a choir boy and substitute organist.

For his thesis composition at the Milan Conservatory, Giacomo Puccini wrote a piece called the Capriccio Sinfonica. This work received positive reviews from his teachers and Milanese publications, and Puccini began to grow a reputation as a young and bright composer. After the premiere of Capriccio Sinfonica, Puccini met Fernando Fontana and decided to collaborate with him on an opera. Their opera Le Villi entered a competition in 1883 and was staged at the Teatro Dal Verme the following year. After this performance, the Casa Ricordi purchased the opera, and it was also performed at La Scala in Milan.

After the success of his first opera, Giacomo Puccini was commissioned to compose his second opera, Edgar. The opera premiered at La Scala in 1889. However, it did not receive good reviews, and it was withdrawn for revisions. His next opera, Manon Lescaut premiered at the Teatro Regio in 1893. The opera was a triumph and was acclaimed by the critics and the public.

After the success of Manon Lescaut, Giacomo Puccini wrote the four-act opera La Boheme, based on the book by Henri Murger, La Vie de Boheme. The opera premiered in 1896, and within years became the leading opera of many European houses. The 1900 opera Tosca followed this opera. This was his first work into the realistic depiction of the real life.

In 1903, Giacomo Puccini and his family were in a serious car accident. He was pinned under the car and had a severe fracture of his leg, and his chest was pressed down by the vehicle. It took him months to recover from the accident, which slowed his completion of the next masterpiece, Madama Butterfly. The original opera premiered at La Scala in 1904. The premiere was a complete disaster, and Puccini withdrew it for revisions. His fifth and final revision was released in 1907 and is now known as the standard version.

After his accident, Giacomo Puccini made less frequent compositions. His editor and publisher Giulio Ricordi died in 1912 thus ending the productive period of his career. Before this, Puccini published his opera La fanciulla del West, which was first performed at the Metropolitan Opera in New York. In 1916, he completed the opera La Rondine which opened at the Grand Theatre de Monte Carlo in 1917.

In 1918, Puccini’s opera Il trittico premiered in New York for the first time. The opera was composed of three one-act operas- a horrific episode, a sentimental tragedy, and a comedy. After this work, Giacomo Puccini began working on his last opera Turandot, which was left unfinished. Franco Alfano later finished it based on Puccini’s sketches.

Giacomo Puccini began a relationship with Elvira Gemignani in 1884. When they first met, she was already married to Narciso Gemignani, but the marriage was unhappy. When she became pregnant with Puccini’s child, the two left Lucca. They were able to marry in 1904 and legitimize their son Antonio. However, the marriage often had troubles. Puccini had several affairs with well-known singers. In 1909, Elvira accused a maid who worked for Puccini for having an affair with him. After this scandal, the maid committed suicide. However, the autopsy revealed she had died a virgin, and Elvira was sentenced to prison for slander. Puccini made a payment to the maids family, preventing his wife to serve her prison sentence.

By the end of 1923, Giacomo Puccini began to complain about frequent sore throats. He was a smoker, and it turned out that he had throat cancer. He underwent experimental radiation therapy in Brussels. He died in Brussels on November 29, 1924.