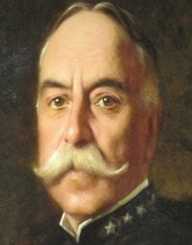 George Dewey was a United States naval commander known for his victory over the Spanish fleet at the Battle of Manila Bay during the Spanish- American War in 1898. He attained the rank of admiral of the navy, which is the highest rank achieved by a person in the US Navy. Graduating from the United States Naval Academy in 1858, he was commissioned a lieutenant of the USS Mississippi during the American Civil War and saw action in the Capture of New Orleans and the Siege of Port Hudson.

George Dewey attained the rank of lieutenant commander during the war. After the war, he continued his service in the navy and served on the Board of Inspection and Survey and the United States Lighthouse Board, earning a promotion to Commodore in 1896. During the Spanish-American war, he led the Manila Bay attack that sunk the entire Spanish Pacific fleet. This victory made him famous in the United States earning him a promotion to Admiral of the Navy in 1903. From 1903 until his death in 1917, he served on the General Board of the United States Army.

George Dewey was born on December 26, 1837, in Montpelier to Mary Perrin and Julius Yemans Dewey. He father was a physician. He had three siblings. He enrolled at the Norwich Military School at the age of 15 from 1852 to 1954. He then enrolled at the Naval Academy, graduating in 1858 as a midshipman. His first time on the sea was a practice cruise in USS Saratoga. By the time of the American Civil War, he had attained the rank of executive lieutenant on USS Mississippi assigned to the Union West Gulf Blockading Squadron.

During the civil war, George Dewey stayed in the Union naval forces and was involved in the battles of New Orleans in 1862, Port Hudson, and Donaldsonville in 1863. From 1864 to 1865, he served in the North Atlantic blockading squadron.

After the War lieutenant commander, George Dewey continued his service in the navy by serving in various capacities. He served at the European station as an executive officer of USS Kearsarge. In 1867 and 1868, he served as an executive officer of USS Colorado. He earned several promotions during the period. In 1896, Dewy earned a commission as commodore and moved to the Board of Inspection and Survey, while in Washington.

Upon his request in 1897, George Dewey was sent to the US Asiatic squadron. While there, he anticipated the inevitable war with Spain. He, therefore, studied the then Spanish owned Philippine Islands, which helped him strategize for the war. In 1897, he started his preparation in Hong Kong. During the outbreak of the War in April 1898, he sailed from Hong Kong to the Philippines and entered Manila Bay in April 30 anchoring in Cavite.

On May 1, he ordered the attack on the Spanish fleet with the famous command, “You may fire when you are ready, Gridley.” Within just six hours in battle, he had sunk all the Spanish Pacific fleet under the command of Admiral Patricio Montojo y Pasaron. All the shore batteries around Cavite were also reduced to nothing. Only one life was lost at the American side. The colossal victory helped the US to annex the Philippines.

After the successful combat, George Dewey was promoted to rear admiral in May 1898. He reached the rank of full admiral the following year. Dewey was graciously welcomed to the United States in 1899. Congress honoured him with the Special rank of Admiral of the Navy in 1903 but took retroactive effect from 1899. This was the highest rank to be held by a US naval officer. Dewey also received several other honours including Battle of Manila Bay Medal and received a special sword from President McKinley on October 3, 1899.

George Dewey married Susan “Susie” Boardman Godwin on October 24, 1867. Susie died on December 28, 1872, five days after giving birth to her son George. Dewey’s second marriage was to Mildred McLean Hazen, a widow of General William Babcock Hazen. He died on January 16, 1917, and was buried in the Bethlehem Chapel, on the crypt level at the Washington National Cathedral.