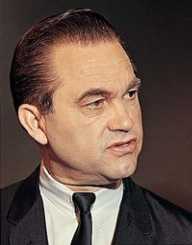 George C. Wallace was born on August 25, 1919. He was an American Politician. He was renowned as the Governor of Alabama a post he held for four terms. He died at the age of Seventy Nine years.

George C. Wallace was born George Corley Wallace on August 25, 1919, in Clio in Alabama, United States. He was born to George Corley Wallace Sr. and Mozelle Wallace. He was brought up alongside three siblings. He was brought up as a Methodist. In 1929, his interest in politics grew in him. In 1935, after being elected to serve as the Alabama Senate page, his interest towards being a governor grew high.

He later joined University of Alabama School of Law to pursue Law where he was a Delta Chi fraternity member. In 1942, he graduated with Bachelors of Law Degree. In 1943, he joined the United States Army Air Forces for pilot training. He later trained Flight engineering due to his health complications. In 1945, he became a B-29 crew’s member. He then quit due to medical conditions.

In 1938, George C. Wallace started his political career by supporting his grandfather by campaigning for him for the probate judge seat. In 1945, he became an Alabama attorney general’s assistant. In 1946, he was elected for the first time in the Alabama House of Representatives. In 1952, he served as Alabama’s Third Judicial Circuit judge.

As a governor, George C. Wallace failed to maintain segregation which he wanted badly. In 1966, due to the constitutional restrictions for him to run for the second term as a governor, he supported his wife as a surrogate candidate. She later won the seat with the support of his husband. In 1967, she took an oath of office. He became the First Gentleman of Alabama.

In 1968, his wife died in office of cancer and was succeeded by Lieutenant Governor Albert Brewer. He later ran for presidency seat as with the American Independent Party with Curtis LeMay as his running mate. He later lost the elections to Richard Nixon. In 1970, he again declared his candidature as a candidate as a Democrat. He later won the nominations and won in the general elections too hence being the Governor of Alabama for a second term.

In 1972, George C. Wallace again announced his presidency candidature as a Democrat. He later won the nominations and was waiting for the general elections. He was later shot in the chest and abdomen following an assassination attempt by Arthur Bremer. Wallace later turned out being paralyzed from his waist downwards. He did not continue with his presidential bid campaign.

In 1974, he ran for the governor seat for the third time and emerged victorious. In 1975, he announced his last presidential bid as a Democrat. In 1976, he dropped out of the race and instead endorsed Former Georgia Governor Jimmy Carter. In 1982, he vied again as a Democrat in the gubernatorial race. He late won the nominations. In 1983, he was elected Alabama’s Governor four his fourth time. This was his last gubernatorial bid, and he served until 1987. In 1987, he retired.