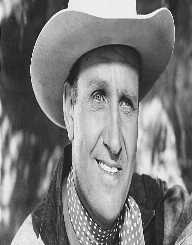 Gene Autry was an American actor and singer and is best known by his nickname; ‘The Singing Cowboy,’ due to his country singing and acting roles as a cowboy.

Gene Autry was born in Tioga, Texas on 29 September 1907 as Orvon Grover Autry. Is parents were Elnora Ozment and Delbert Autry. While still young Autry’s mother died and the family moved to Oklahoma. He helped his father on the ranch he owned there as well as attending school. Autry’s first experience of singing came from singing at his local church and playing guitar. At the age of sixteen, he left school and began working for St Louis – San Francisco Railway, a railroad company. He would man the telegraph lines that ran along the rail lines. Autry would often play his guitar to pass the time during his work shifts. One night he played for Will Rogers, the comic performer, who advised him to become a singer. Autry then moved to New York to pursue a career in show business.

In 1928, Gene Autry was rejected by the RCA Victor record label, he was given a letter of introduction and advised to build his profile. Autry then began appearing on a local radio station in Tulsa as ‘Oklahoma’s Yodelling Cowboy.’ In 1929, Autry got his first record deal when he signed with Columbia Records. He also received his show on a Chicago radio station which would run for four years. Autry mostly recorded covers during this early period of his career. Autry moved to California in 1934 and made his film debut in, In Old Santa Fe. Autry played a small role in the film, part of a troupe of singing cowboys. Autry’s next acting role was as the star in the short series, The Phantom Empire, another Western. With the production company, Republic Pictures Corp, Autry would make over forty Western films before 1940. Autry often appeared with the performer Smiley Burnette as his sidekick and the two would often sing at some stage of their films.

In 1940, Autry was given his show on CBS Radio, Gene Autry’s Melody Ranch. The show also launched a spin-off show based on Autry’s horse, Champion. The show was hugely popular with children, and many wished to become cowboys like Autry. Autry in response developed the ‘Cowboy Code’ a list of rules of how to be a good cowboy. The rules were mainly about being kind brave and respectful to others. Autry joined the U.S.A military during the Second World War and served as a transport pilot. Autry flew missions in China and India performing airlift missions.

Autry was also a successful businessman he owned rodeo stock and a ranch used for film production. Autry also was the founder of the Challenge Records record label, which is best known for producing The Champs’ hit, Tequila. Autry would also assemble a substantial media empire consisting of some radio stations and a Los Angeles based television station. After the end of the Second World War Autry returned to performing. Autry’s biggest successes were his Christmas songs, Autry released, Santa Claus is Coming to Town, Here Comes Santa Claus, Rudolph the Red Nose Reindeer, and Frosty the Snowman. Autry was also a baseball franchise owner. During the 1950s he part owned the minor league team, the Hollywood Stars. When the major leagues expanded to California Autry sought to gain the coverage rights to their games. Instead, Autry was offered ownership of the newly formed, Los Angeles Angels, in 1961.

Autry also served as vice-president of the American League. He sold his controlling stake in the Angels to Disney in 1996. The Angels retired the number 26 jersey in honor of Autry to symbolize him being the 26th man on the 25 man MLB roster. Autry also sold off much of his media holdings netting him hundreds of millions of dollars. Autry had retired from show business in 1964; he had appeared in over one hundred movies and released some six hundred records.

Gene Autry married Ina May Spivey in 1932, and the marriage lasted until her death in 1980. The following year Autry married Jacqueline Ellam. Autry would die of lymphoma on 2 October 1998. Autry was also a Freemason and was a member of the Catoosa Lodge in Oklahoma. He was a 33rd degree, Master Mason.

Gene Autry has been inducted into some halls of fame, reflecting his success and contributions to some fields. In 1972, he was inducted into the Western Performers Hall of Fame. He received a star on Hollywood’s Walk of Fame for each of the five categories represented on the walk, Film, TV, Music, Radio, and Stage. Autry is also a member of the ProRodeo Hall of Fame.