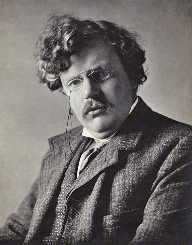 Gilbert Keith Chesterton famously referred to as G.K Chesterton was born on 29th May 1874 in London, England. Gilbert was an imaginative person with a passion for a wide range of disciplines in the field of arts. He, however, had his love for literature mainly in the English language. He was amongst many things a writer, art critic, an orator, dramatist, philosopher, and even a biographer.

Gilbert is mainly acknowledged due to his fictional work, Father Brown which is an exceptional piece. Also, he was recognized for his stout stature and enthusiastic character. Some biographers have gone as far as comparing him to Victorian authors like Thomas Clay and John Henry Newman.

G.K Chesterton later in his life had some religious struggle that saw his conversion to Catholicism. Gilbert Keith Chesterton was roughly 62 years of age when he died, in Beaconsfield, Buckinghamshire. His body lies at the Roman Catholic Cemetery in Beaconsfield.

The birth of G.K Chesterton came on 29th May 1874 in Campden Hill in Kensington, London to Marie Loui and Edward Chesterton. The Church of England saw to his baptism under the supervision of his parents when he was only one year old. His family was not devout Christians, and this opened ways for him to experiment with occult with his brother Cecil.

G.K Chesterton was a bright child and saw that he attended school at St. Paul’s School which was a Catholic school. He did not immediately attend college, and he went to enhance his artistic nature at the Slade School of Arts. Gilbert extended himself to learn literature too since Slade was a branch of the University of London.

While he was still working with T. Fisher publishing house, he also doubled as a freelancing journalist and an art critic. The Daily News gave him a chance to write for their weekly opinion column in 1902. The Illustrated London News did not fall behind after noticing his work and offered him another weekly column. He wrote for them for the next 30 years.

Gilbert was a fictional writer with an imaginative mind. This led him to create and write some of the most highly appreciated fictional works like The Napoleon of Notting Hill in 1904. In addition to that, the next year (1905) saw his publication of some short stories, The Club of Queer Trades.

The year 1908 also saw the publishing of the famous novel, The Man Who Was Thursday. G.K Chesterton, however, received the praises of a lifetime when his series of fictional controversial short stories Father Brown were published. Some of these included, “The Innocence of Father Brown (1911), followed by The Wisdom (1914), The Incredulity (1926), The Secret(1927), and The Scandal of Father Brown (1935).”

G.K Chesterton was born into a family that had no religious standing. His parents, however, saw to it that his baptism took place in the Church of England when he was one month old. As a small child, Gilbert once confessed to having had an interest in occultic religion. He said that he and his brother tried to use the Ouija board.

As he grew up, Gilbert grew an interest in theology and religious radical religious discussions. In 1922, he finally realized that he wanted to change his faith; so he converted from Anglicanism to Roman Catholicism. Gilbert was also a religious writer and wrote some books like Orthodoxy in the year 1909.

Four years into his conversion into a Roman Catholic, G.K Chesterton published his book, The Catholic Church and Conversion. Gilbert being a literature student and a writer found a way to cope with his conversion through text. He then wrote other works like The Religious Man that was published in 1925. Moreover, he also wrote, The Thing: Why I am Catholic and St. Thomas Aquinas.

The year 1901, saw the union of G.K Chesterton and Frances Blogg in holy matrimony which ended only after his death at the age of 62 years. He usually said that his wife was trying to reconvert him back to Anglicanism. He decided not to convert back as he said that the Anglican way was more of an imitation of Catholicism.

Gilbert's faith in the Catholic weathered the storm until his death on 14th June 1936. His remains lie at the Roman Catholic Church Cemetery in Beaconsfield.