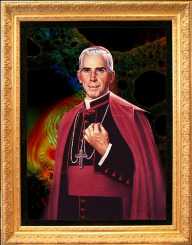 Evangelist, writer, priest, and media personality Fulton J. Sheen was born on the 8 May 1895 in El Paso, Illinois to Newton Sheen and Delia Fulton who were both of Irish ancestry. The family moved to Peoria Illinois when he was a child, and it was at St Mary’s Cathedral that he first became an altar boy. Sheen had three younger brothers.

Sheen graduated from Spalding Institute, Peoria in 1913. He then attended St Viator College, Bourbonnais, Illinois before becoming a seminarian at Saint Paul’s in Minnesota. He was ordained on the 20 September 1919. Further education continued at The Catholic University of America, Washington during 1920. Sheen later earned a doctorate in philosophy at the Catholic University of Leuven, Belgium (1923). Following his doctorate Sheen studied at the Pontificium Collegium Internationale Angelicum, acquiring a Sacred Theology Doctorate.

Initially Sheen worked as a pastor in Patrick’s Church Soho Square London. At the same time, he was lecturing in theology at St Edmund's College, Ware.

After Sheen’s return to the US, Bishop Edmund Dunne of the Diocese of Peoria Illinois appointed him a parish priest at St Patrick’s for nine months in 1926 before transferring him to the Catholic University. He was elected a lecturer in philosophy at the Catholic University where he stayed until 1950. Sheen became a bishop on the 11 June 1951 and was named Auxiliary Bishop of the Archdiocese of New York a position he held until 1956.

After retirement Sheen continued teaching and running retreats. He was granted the title of titular archbishop of Newport Wales. During 1969 and the early 1970s he preached in Dublin Ireland. At age 80, in 1975, he taught to over 75,000 people at the Holy Year Rally in New Orleans. Sheen spoke at the National Prayer Breakfast hosted by President Carter in Washington DC in January 1979 and in October that year was embraced by Pope John Paul II at St Patrick’s Cathedral in New York City. Sheen died on the 9 December 1979.

His autobiography Treasurers in Clay was published in 1980.

Sheen was the author of over seventy books. He also was the host of a weekly radio show, The Catholic Hour which ran from 1930 until 1950. He was the first to conduct a religious service on television. His weekly television show on the DuMont Television Network, Life Is Worth Living, was popular and in 1952 Sheen won an Emmy for the show. Life Is Worth living continued until 1957 and at its peak had a weekly audience of thirty million people. From 1961 until 1968 he was the host of The Fulton Sheen Program. In the mid-1970s Fulton recorded a series of speeches he made to priests at the Loyola Retreat, and these were produced and distributed worldwide.

The process for the canonization of Sheen as a saint began in 2002. In 2012 Pope Benedict XVI declared that the Congregation for the Causes of Saints had recognized Sheen’s life as one of heroic virtue and proclaimed him Venerable Servant of God Fulton J. Sheen. In March 2014, it was announced that the board of medical experts unanimously agreed concerning a reported miracle attributed to Sheen’s intercession. On the 17 June 2014, a seven-member theological commission advised that the congregation agreed with the medical team’s findings. The next step in the process is beautification.

Sheen won a 1952 Emmy for the Most Outstanding Television Personality and was also on the cover of Time Magazine. In 1975 Peoria Illinois awarded Sheen the Civic Award, and he was also awarded the Salvation Army’s William Booth Award in New Orleans. In May 1977, Sheen was given the State of Illinois’s highest honor: the Order of Lincoln.