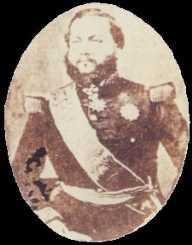 Francisco Solano López was born on the 24 July 1827 in Asuncion, Paraguay. His father was President Carlos Antonio López of Paraguay at the time of his death on the 10 September 1862, and Francisco Solano Lopez took over his role.

Lopez became a Brigadier General in the army in 1844. He was later appointed Commander-in-Chief of the military.

In 1853, he was sent to Europe and stayed there for eighteen months. Lopez attended college in Paris, furthering his studies in military matters. He impressed the French with his ability and was awarded the Order of the Legion of Honour by Napoleon III.

As well as studying in Europe, Lopez was organizing military supplies for Paraguay and encouraging French settlers to move to his homeland.

Upon his return to Paraguay in 1855, he was appointed as Minister of War, and in 1957, he became the Vice-President of Paraguay.

Francisco Solano López differed from his father’s policy about foreign affairs and isolation. He was ambitious and had a vision of Paraguay becoming a force in the region.  Argentina and Brazil, the powerhouses in the area, had ongoing issues relating to the Rio de la Plata Basin, and López saw Paraguay playing a part in gaining territory and power. He reasoned that if the small countries formed a coalition to negotiate with Argentina and Brazil, this would increase their influence in the region. Uruguay allied with Paraguay. Part of the agreement was enforcing military service on both populations. Lopez, with his military training and astuteness, organized the Paraguayan army a formidable force. Uruguay was unstable because a civil war had been raging between the Blancos and the Colorados. Paraguay supported the Blancos, hoping that this would ensure a permanent alliance with Paraguay. Brazil supported Colorado.

The war developed when Uruguay asked Paraguay for assistance when Brazil backed a rebellion against their government. Lopez response was to advise Brazil that because of their alliance, any attack on Uruguay would be viewed as an attack on Paraguay as well.
Then in 1864, the Paraguayans abducted and imprisoned a Brazilian Governor (Historically, in 1844, Brazil had been the first country recognize the independence of Paraguay). Lopez declared war on Brazil, in December 1864. Brazil invaded Uruguay and defeated the Blancos.

When Lopez then asked permission from Argentina to allow his troops to cross their country to support the Blancos, Argentina refused. In April 1865, Paraguay declared war on Argentina.

Brazil, Argentina, and Uruguay subsequently signed the Treaty of the Triple Alliance the 1 May 1865 declared war on Paraguay.  Bartolomé Mitre, president of Argentina, was named the supreme commander of the combined forces.

International opinion was widely was against the treaty, and supported Paraguay.

The Brazilian Navy destroyed Paraguay's fleet in June 1865. The Paraguayan army had no option but to retreat from Argentina.  The vicious war dragged on until 1868, Lopez became convinced that there was a plot against him. He ordered the execution of hundreds,  including his brothers, priests, and military officers.

After conventional war methods fail, Paraguay conducted a guerrilla war which lasted until the Battle of Cerro Cora when Brazilian forces killed Lopez and brought the war to a close.

Paraguay had suffered a population loss of close to fifty percent, and almost seventy percent of adult males. The country also ceded territory to Argentina and Brazil. Both countries continued to occupy Paraguay until 1876 until 1876.

Francisco Solano López had met an Irish girl, Elizabeth Lynch in Paris, and when he returned in 1855, she joined him on the trip home and remained his partner until he died. The couple had six children; Juan Francisco, Corina, Enrique, Federico, and Leopoldo.

The Lopez family were Roman Catholics.

Some in South America regarded Francisco Solano Lopez as a hero for taking on powerful enemies in the region. Others considered him a cruel dictator.

Today Lopez is considered a tremendous Paraguayan national hero in his homeland. Heroes Day, on the 1 March is celebrated annually in his memory.

Lopez Sr. left a stable, economically prosperous country when he died. Some felt that the War of Paraguay was a disaster for the country and held Francisco Solano Lopez responsible for it.

Lopez was on the steamship Tacuari in 1859 when the British Royal Navy intercepted the ship and demanded that Paraguay releases a British subject.