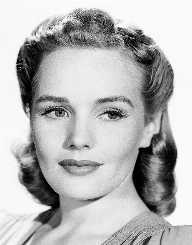 Frances Elena Farmer was an American actress and television host. Born on September 19, 1913, she was an up-and-coming actress, but personal struggles and degeneration of her mental health along the line affected her career. Farmer started her career on stage before venturing into films. She signed with Paramount Pictures in 1936 and her debut movie Too Many Parents followed that same year.

Her Works include Rhythm on the Range, 1936, World Premiere, 1941, Broadway production of Clifford Odets’s Golden Boy, among several others. Her mental health derailed due to depression and alcohol intake and in the 1940s was diagnosed with paranoid schizophrenia. She was then confined in a psychiatric institution until 1950. Farmer launched a career comeback appearing in works like The Party Crashers. She also hosted her television show, Frances Farmer Presents. Diagnosed with esophageal cancer in 1970, Farmer died same year age 56.

Actress and TV host Frances Elena Farmer was born on September 19, 1913, in Seattle, Washington. She was the third child of Lilian and Ernest Melvin Farmer. Her father was a lawyer and her mother a dietician and boarding house, operator. Her siblings were Edith, Wesley, and half-sister Rita from her mother side. Lilian moved the children to Los Angeles after separating with Ernest and later to Chico, California. To pursue her career, Lilian then returned the children to their father in Seattle. Lilian and Ernest finally divorced in 1929, leaving the children with their father.

Frances Farmer schooled at West Seattle High School and continued at the University of Washington where she initially pursued journalism. To pay her tuition, Farmer worked as an usherette in a cinema, labourer in a soap factory and as a waitress. She joined the University’s drama department where she featured in several plays. She graduated from UW with a Bachelor of Arts degree in drama in 1935.


Initial Career and Rise to Fame

Frances Farmer launched her theatre and film acting career in New York City in 1935. She started performing in stock theatre and would later join the Group Theatre in New York. In 1935, she signed with Paramount Pictures for her film career. Farmer featured in several plays by The Group and at some point in time felt being used and cheated and therefore decided to focus on her film career.

In 1936 and in November she featured in the B-movie Too Many Parents released in 1936. After the success of the film, she played the lead role in the drama Border Flight. Her debut film was A-movie was Rhythm on the Range, starring Bing Cosby. She earned high reviews for her performance bringing her to the limelight. In

1936, Frances Farmer starred in Samuel Goldwyn’s Come and Get It, which won her critical acclaims from both the public and reviewers and established her as a rising star. Farmer earned a reputation for being difficult on set and cold to the press, wishing to remain private. She starred opposite Cary Grant in The Toast of New York, 1937, Exclusive, 1937, opposite Fred MacMurray in Ebb Tide in 1937.

She featured in several works in the 1940s including South of Pago Pago, Flowing Gold, World Premiere, Among the Living, and Badlands of Dakota. Farmer continued to have a dispute with producers and executives during shootings, which caused the cancellation of her contract with Paramount in 1942.

Unsatisfied with the level of progress of her career and the frustrations that comes with it, Frances Farmer became depressed and began to find solace in drinking. She faced several law issues, especially with drunk driving and assault. Farmer was arrested for drunken driving and fined $500 of which she paid $250. In 1943, while on set, she had a brawl with a dresser, who accused Farmer of dislocating her jaw by punching her face. As she failed to pay the remaining $250 fine, police rearrested her, and she was put before the court.

Farmer, however, showed dissident to the judge and was sentenced to 180 days in jail. Sensing a psychological problem, she was instead sent to the psychiatric ward of Los Angeles General Hospital, where she was diagnosed with manic-depressive psychosis. She was transferred to the Kimball Sanitarium where she was diagnosed with paranoid schizophrenia.

Frances Farmer was sent to several other mental institutions including Western State. Farmer went into several treatments including receiving insulin shock therapy and alleged transorbital lobotomy. She claimed she was forced to eat her faeces and became a sex slave for doctors.

After her discharge from Western State in 1950, Frances Farmer worked several odd jobs to make a living. She made a comeback in the entertainment scene by appearing on several shows. In August 1957, she relaunched a stage career in New Hope, Pennsylvania. She featured in the summer stock production of Enid Bagnold’s The Chalk Garden. She then appeared in several live dramas. She had her daytime show Frances Farmer Presents from 1959 to 1964.

In 1936, Frances Farmer married actor Leif Erickson, whom she met at Paramount. The marriage ended in divorce in 1942. During this period, she entered into a romantic relationship with playwright Clifford Odets. Odets was married to actress Luise Rainer, therefore showed no commitment to the relationship and later ended it. Her second marriage was to a utility worker Alfred H. Lobley in 1954 and divorce in 1957.

The following year, she married broadcast promoter, Leland C. Mikesell. In 1970, she was diagnosed with esophageal cancer and died of it at the Indianapolis Community Hospital on August 1, 1970. She was buried at Oaklawn Memorial Gardens Cemetery in Fishers, Indiana. Her autobiography Will There Really Be a Morning? was posthumously-published in 1972.