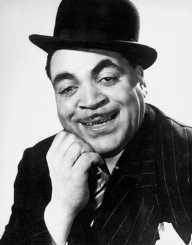 Thomas Wright Waller, who would later be known better by the name Fats Waller, was born on May 21, 1904, in New York City, New York, USA. His parents were Reverend Edward Martin Waller and Adaline Locket Waller. He also had three older siblings. Adaline died in 1920 when Fats was still a teenager. After her death, he moved out of his parent’s house and lived with another family, as he did not get along well with his father at the time.

Fats Waller was born into a highly religious family. His father served as a reverend at a local Baptist church. Because of this, religion was an important part of Fats' life. He learned how to play the piano when he was a child, and when he was only ten years old, he began to play the organ at his father’s church. Fats Waller also knew who to play the bass and violin, but he did not become famous for these talents. It was in part because of his mother’s support and piano lessons that Fats became the musician he grew up to be, even though his father wanted him to work in religion as he did.

He easily charmed everyone in the club, gaining him a small amount of fame in just one night. Soon after, he was introduced to Quality Reigns Supreme to record songs. Within the next five years, he recorded almost 20 songs for the company.

In 1926, he signed on with Victor, a record company. Fats Waller worked with this group for the rest of this life. It was with his group that he rose to fame. He was so famous at one point that he was kidnapped by mobsters to play at notorious gangster Al Capone’s birthday party in 1926. In the 1930’s, Fats began to tour around Europe and then in America. Throughout his career, he was estimated to record more than 400 songs, most of them original compositions. His piano tunes made him famous in New York City and all over the country. Some of his most famous songs are listed below.

Don’t Let It Bother You

It’s A Sin To Tell A Lie

My Very Good Friend the Milkman

Fats Waller not only played music but also dabbled in acting. During his lifetime, he was in three films. In two films, he played himself: Stormy Weather and Hooray for Love. He also played a character named Ben in the film, King of Burlesque. Videos of Fats were also added to a video after his death, in 1991, called Dr. Demento 20th Anniversary Collection.

Aside from acting, his music has been in over 100 movies both during and after his lifetime. Some of the movies his songs have been in include The Curious Case of Benjamin Button, Office Space, and Applause.

Fats Waller was a wonderful musician, but he was not awarded for any of his songs during his lifetime. It was not until 1978 that he won his first awards. He won two awards for his song, Ain’t Misbehavin’, the New York Drama Critic’s Circle Award for Best Musical and the Drama Desk Award for Outstanding Musical, as his song was used in a musical after his death. Fats Waller was given the Grammy Lifetime Achievement Award in 1993, and two of his songs (Ain’t Misbehavin’ and Honeysuckle Rose) were put in the Grammy hall of fame.

Fats Waller led an unhealthy lifestyle near the end of his life. He drank too much and smoked. He was also overweight. In the 1940’s, he got the flu. This was complicated by his drinking and smoking, which later turned the flu into pneumonia. He died from the illness on December 15, 1943, in Kansas City. He was 39 years old when he passed away.