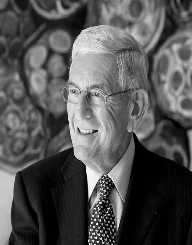 Eli Broad was born on June 6, 1933, in New York City, New York, USA. His parents were Rita and Leon Broad. The Broad family moved to Detroit, Michigan, when Eli was a child. He would go on to spend his adolescence there.

As a teenager, Eli Broad attended Detroit Central High School. He later graduated from his school in 1951. In the fall of the same year, he enrolled at Michigan State University. While here, he studied accounting. He also worked on his certificate to become a Certified Public Accountant (CPA). He graduated from college in 1954.

After college, Eli Broad began working as an accountant. Shortly after graduating, he opened his accounting firm.

In 1956, he began working as an assistant professor at the Detroit Institute of Technology. He mostly taught night classes while here.  He continued to work as an accountant during the day while he did this.

In 1957, Eli Broad and his relative-in-law, Donald Kaufman, opened a residential construction company called Kaufman & Broad. Broad handled the purchasing portion of the company, while Kaufman worked on the architectural side of things, designing buildings for the company. The goal of the company was to make affordable but functional houses in Detroit. By the end of the decade, the company was reaching its goals. The company had made hundreds of affordable homes in Detroit by 1960.

Throughout the 1960’s, Eli Broad continued to focus on his residential construction company. He and Kaufman expanded the company out from Michigan and into other areas of the United States. By the end of the decade, the company had also expanded to Europe. This was the first American residential company to build houses in France.

In 1971, Eli Broad purchased a new company for himself: the Sun Life Insurance Company of America. He later renamed the company Sun America. He owned his company until 1999. In this year, he sold the company to the American International Group. He continued to work with the company as its CEO until 2000.

In 2004, Eli Broad began working as the Regent of the Smithsonian Institution. He worked here until 2009.

In recent years, Eli Broad has worked closely with the Museum of Contemporary Art. He currently serves as a chairman of the museum. He also donates to this museum often.

Most of Broad’s charitable giving are to educational groups. The Broad family (Eli and his wife) have set up various services, awards, groups, and foundations which they give money to regularly. Some of these groups are listed below.

The Broad family has also committed to The Giving Pledge. Before their deaths, or in their wills, they will give away 75% of their wealth to charity.

Broad’s awards are due to his charitable giving. Some of his most prestigious awards are listed below.

Eli Broad married Edythe Lawson in 1954. The couple is still currently married. Together, the couple has two sons.