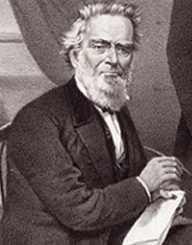 Edward Bates was born on 4th September 1793 to Thomas and Caroline Bates. He was born on the family’s plantation in Virginia and was also home-schooled there as a boy. His parents were Quakers, and there were 12 children in the family. He was born into a very wealthy family, with him playing a prominent role in politics and industry, in particular.

After being home-schooled for his younger years, in 1808, he was enrolled in Charlotte Hall Military Academy in Maryland.

His father died when he was very young, but Edward Bates had older siblings that took good care of him. When he enlisted in 1812 to take part in the war, his mother wasn’t happy that he had taken up arms to fight. He took the advice of one of his older brothers, and left the military to study law.

He moved to St. Louis in 1814 and studied law with Rufus Easton. He had two older brothers in St. Louis – James, who also studied law, and Frederick who was working in politics. Bates boarded with his two brothers.

Once he was admitted to the bar in the winter of 1816/17, Edward Bates became a partner with Easton. Easton was the judge of the Louisiana Territory.

His partner in private practice was Joshua Barton, who became the first Missouri Secretary of State. Barton was killed in 1823 during a duel.

Edward Bates’ political career began in 1820. He was elected as a member of the state’s constitutional convention. His next appointment was as the first Attorney General for Missouri, once it became a state. Bates then went on to be elected to the Missouri House of Representatives in 1822.

He was a prominent member of the Whigs Party, but when the party broke up during the 1850s, he went on to become a Republican.

He was asked by President Fillmore in 1850, to become U.S. Secretary of War, but Edward Bates politely declined.

Edward Bates was one of four candidates put forward for the 1860 presidential nomination, but he soon realized he didn’t have enough support, so he decided to put his support behind Abraham Lincoln. In 1861, when Lincoln won the election to become president, he appointed Edward Bates as the U.S. Attorney General. He held the position from 1861 to 1864.

His position as Attorney General was important to begin with, as it was his responsibility to execute the war policies set out by Lincoln. As Lincoln’s policies went on to become more radical, Edward Bates played less of a role. He spoke his mind on issues even though it wasn’t in agreement with Lincoln. Two key areas of disagreement were emancipation (Edward Bates disagreed with it) and the recruitment of blacks into the Union Army (once again, Edward Bates disagreed).

Edward Bates had wanted the position of Chief Justice, but in 1864, Lincoln nominated another person to the role, so Bates resigned.

He returned to Missouri, and joined the fight against adoption of the Missouri constitution in 1865. Even though Bates wrote several papers on key objections to the constitution, it was not ratified and accepted. After this set back, Bates retired from politics.

In 1823, Edward Bates married Julia Coalter, a young lady from South Carolina. They went on to have 17 children together.

He also freed all his slaves, as he felt it was inhumane to treat other humans in the manner that slaves were kept.

Edward Bates was part of the team that wrote the constitution for Missouri in 1820. He also went on to become the first Attorney General once Missouri was admitted as a state. Bates name will forever be in the history books.