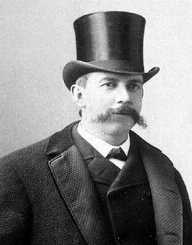 American newspaper publisher E.W. Scripps was born Edward Willis Scripps on the 18 June 1854 in Rushville, Illinois to Julia Adeline Osborne and James Mogg Scripps. His father was from England and his mother from New York. Scripps was one of six children.

E.W. Scripps started his working life employed by his brother James Edmund Scripps on The Detroit News in Detroit Michigan (1873) and worked his way up the ladder. His family assisted financially when in 1877, Scripps founded his first newspaper The Penny Press, which would later be renamed The Cleveland Press.

E.W. Scripps formed the Scripps-McRae League of Newspapers with his brother George H. Scripps and Milton Alexander Rase in 1894 and also founded the Scripps Coast League, acquiring newspapers on the West Coast of the US. Scripps eventually owned over 30 newspapers across the country. In 1902. Scripps formed the Newspaper Enterprise Association. In 1987, he merged Scripps-Rae Press Association with the United Press to established United Press. In 1958, United Press merged with the Hearst organisation to form the International News Service.

E.W. Scripps' son Robert Paine Scripps took over the running of his empire in 1922 and along with Roy W. Howard founded the Scripps-Howard chain.

E.W. Scripps co-founded of the Marine Biological Station of San Diego (1903) with his sister Ellen.