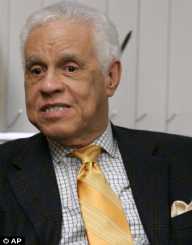 Lawrence Douglas Wilder was born 17th January 1931, to Robert and Beulah Wilder. He was born in Richmond, Virginia, in the United States. Wilder had seven siblings, and they were grandchildren of slaves. Wilder’s parents both worked, with his father an insurance salesman, and his mother, a maid.

He studied at Virginia Union University, which was known as a black university, and paid for his tuition by working as a shoe shiner and a waiter. Wilder graduated in 1951 with a chemistry degree. He was drafted into the Army and saw battle in the Korean War. He fought admirably, and by the time of his discharge in 1953, he had reached the rank of sergeant.

He worked for the state medical examiner’s office and studied at the same time for his master’s in chemistry. In 1956, Wilder had a change of heart and decided to study law. He enrolled at Howard University Law School and graduated in 1959.

Douglas Wilder established his law practice in Richmond, Virginia, where he worked for several years. In 1969, he won a seat in the Virginia State Senate, as a Democrat. His political career had begun. He worked hard over the years to gain exposure and make himself known to his constituents, and in 1985 he was elected to the role of Lieutenant Governor of Virginia.

Wilder’s career continued, and in 1989, he became Governor, the first African-American to hold the position. He worked diligently as Governor, tackling issues like crime, gun control, and public transport. He also led Virginia in becoming the first Southern state to shed all investments in South Africa as a protest to its apartheid policy. His term in office finished in 1994.

In November 2004, Douglas Wilder was elected as Mayor of Richmond. He held the position for four years, but he did not seek to run again in the 2008 elections. After retiring from politics, he has worked as an adjunct professor. He works in the L. Douglas Wilder School of Government and Public Affairs, and his area of expertise is Public Policy.

Wilder also writes for Virginian newspapers on occasion. He established the United States National Slavery Museum in 2001, but the museum filed for bankruptcy in 2011. He released his autobiography in 2015, called, Son of Virginia: A Life in America’s Political Arena. His papers, including audio cassettes and video cassettes, are kept at the L. Douglas Wilder Library and Learning Resource Center at Virginia Union University.

Among his awards and honors, Douglas Wilder has had buildings named after him in several universities, including Virginia Commonwealth University, Norfolk State University, and Hampton University. Wilder was awarded the Bronze Star for his military service, and in 1990, he was awarded the Spingarn Medal by the National Association for the Advancement of Colored People.

In 1958, Douglas Wilder married Eunice Montgomery. They had three children together, but they divorced in 1978.