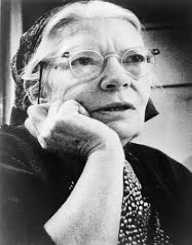 Dorothy Day of blessed memory was an activist, writer, editor, social reformer and Catholic Worker. She dedicated her life to social reforms and her faith and is today celebrated all over the world as her legacy remains.

She was the third of five children and had three brothers and a sister. Her father was a journalist and worked for a newspaper based in San Francisco. He was a sports article writer for the paper and majored in writing on horse racing.

Dorothy Day and her family had to move to California when she was just six years old due to the demands of her father's job. Tragedy sadly struck as her father's newspaper's facilities were destroyed by the 1906 San Francisco earthquake.

Although her parents were only nominal Christians and rarely attended church, she became quite religious and cultivated the habit of reading the bible. At the age of ten, she began attending Church of our Savior, an Episcopal Church based in Lincoln Park, Chicago. She became baptized and confirmed in 1911.

Dorothy Day enjoyed reading during her teenage years and learned a lot from the books she read. Most of the books she read were about social work, social justice and this played a significant role in her choice of becoming a social activist.

She got a scholarship to attend the University of Illinois. She enrolled in the University between 1914-1916. While at school, she avoided the campus social life. She also was not very interested in reading while in school.

Dorothy Day preferred to read books about Christian radicalism or social welfare. She supported herself through school and did not depend on her father for her protection. She would later abandon her studies to move to New York City.

There, she became involved with a literary and Liberal Crowd at Greenwich Village Neighborhood. She then worked as a journalist, writing articles for many socialist and progressive publications. She also interviewed some prominent figures.

Dorothy Day's venture into journalism saw her work as a staff of some Socialist Publications. Notable among these are The Liberation, The Masses, and The Call. She was socially and politically active.

She was arrested sometimes due to her involvement in protests against the government. In 1917, She was arrested for protesting in front of the White House. Her protest this time was part of an effort to secure the right to vote for women, a campaign which was then called the Silent Sentinels.

Her socialist work made her meet with many like minds. She became close to Eugene O'Neill, who she credits with helping her intensify the religious sense in her.

She also had an affair with Mike Gold, who was a radical writer and later prominent Communist. She was also close to Anne Louis Strong and Elizabeth Gurley Flynn, who was also a communist movement leader.

Dorothy Day initially lived a Bohemian lifestyle. She went into a relationship with Lionel Moise who she had an abortion for. The relationship ended unhappily for her. She then got married to Berkeley Toby, who was then a literary promoter. The marriage held on the 21st of February, 1921. However, the union did not last for more than a year, and they separated soon after.

Dorothy Day wrote a semi-autobiographical novel titled, The Eleventh Virgin, in which she told the story of her ill-fated affair with Moise. She would later get involved with Forster Batterham, an activist, and biologist. When she realized she was pregnant for Batterham, she was elated as she had thought she had a barren womb after her abortion.

Batterham, on the other hand, was afraid to be a father. Dorothy Day and Batterham welcomed their daughter, Tamar Teresa. The day began to get interested in Catholicism and would baptize Tamar in the Catholic Church. Batterham was against her new found faith and the baptism of their daughter. These differences led to their separation, and she finally converted to Catholicism in 1927.

Dorothy Day would later work with Pathé Motion pictures as a film dialogue writer. She also worked for the Staten Island Advance, which was a local paper. She wanted to offer more of herself to Catholic activism as she had the burning desire to do much more for the church.

In 1932, after Dorothy Day met with Peter Maurin, who was a French Immigrant and Christian Brother and together they formed the Catholic Worker, which was a Newspaper primed with the objectives of promoting the teachings of the church and also tackle nagging societal issues.

The success of the newspaper led to the formation of the Catholic Worker's Movement, which also was known for its fight against social injustice. The day was very much active in the happenings of the day, be it church or the society. She took her activism to another level higher with her pacifism stance and campaign against the United State Declaration of war in 1941.

Dorothy Day urged people not to cooperate with the war. She also published her autobiography, titled, The Long Loneliness, in 1952. She joined a lot of Pacifist Movements and was involved in many activist protests and Campaigns, all for the improvement of social justice and welfare.

Dorothy Day's life was very much dedicated to service to humanity and the Catholic Church. She died of a heart attack on the 29th of November 1980, at Maryhouse, Manhattan, one of the Catholic Settlement houses which she helped to establish. Her movement continues to thrive today and has 200 communities across the United States and a further 28 abroad.

Her life story has been told in many books and films. There have also been calls within the Catholic Community as well as the world over for her to be canonized for her social activism and a strong belief in the Catholic faith. She received numerous awards while she lived and had also been honored post-humus as well.

Dorothy Day is indeed a true definition of Service to God and Humanity. A legendary woman indeed!