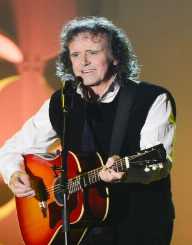 The pop singing sensation of the 1960s, Scottish-born singer, songwriter and guitarist Donovan Philips Leitch was born on May 10, 1946, in Maryhill, Glasgow, Scotland. His father Donald Leitch was a Protestant whereas his mother was a Catholic. He suffered polio during his childhood which is the reason he was left with a limp. He attended Kent Road School in Glasgow. His family relocated to Little Berkhamsted near Hatfield, Hertfordshire, in 1956. There Donovan received his secondary education at St. Audrey's in Hatfield, Hertfordshire. He was enrolled at the Welwyn Garden City College for further education but soon dropped out to pursue his passion for music.

Born in a family of music lovers, Donovan started playing guitar at the age of 14. During the early 1960s, a wave of folk music culture was sweeping England and the United States of America. Donovan along with his musician friend "Gypsy Dave," embarked on a limited tour of the United Kingdom after embracing the folk music boom during the early part of the mid-1960s. Singing mainly traditional and folk songs, Donovan also played guitar and harmonica while his friend collaborated with him playing the kazoo. He also began writing songs at this point. The life he had witnessed while staying away from home and the experience he gained from such exposure was the theme of his early songs.

Donovan returned to Hatfield after having lived out his beatnik aspirations away from home. He started playing in the local clubs simultaneously learning the fingerstyle technique of playing guitar from local players like Mac MacLeod and Mick Softley. In the summer of 1964, he stayed with Mac Macleod in Torquay, Devon and learnt guitar, traditional folk, and blues.

Donovan recorded a 10-track demo tape which includes the original of his first single ‘Catch the Wind’ and ‘Josie’ in late 1964, after having accepted a management and publishing contract of Pye Records of London. The demo tape was released on iTunes afterwards. ‘Catch the Wind’ was later released as a single and gained immense popularity among the music lovers. His resemblance to Bob Dylan both in appearance and their musical style started his inevitable comparison with the musical legend. Media started calling Donovan a ‘Dylan Clone,’ both singer being influenced by the same musical generations of Ramblin' Jack Elliott, Jesse Fuller, and Woody Guthrie.

He gained more popularity and stormed into the larger music scenario with a series of live performances on the British Television Series broadcasting favorite rock songs titled ‘Ready Steady Go!’. In 1965, Donovan successfully stopped all his comparisons with Dylan, when he released the single “Sunshine Superman,” an ode to the hippie lifestyle initiating the psychedelic revolution single-handedly after having collaborated with British producer Mickie Most.

Donovan continued to define the era churning out more hits like ‘Mellow Yellow’ (1967), ‘Hurdy Gurdy Man’ (1968) and ‘Season of the Witch,’ a song included in the album also titled ‘Sunshine Superman’ and regarded as a classic of that era. ‘Sunshine Superman,’ released initially as a single in the US in June 1966. The single sold over one million copies reaching the No. 1 position on the US chart and was awarded a gold disc. His subsequent album of the same name also fared very well reaching the No.11 position on the US album chart and sold over half a million copies. He dedicated his No.1 single ‘Sunshine Superman’ in the name of John Lennon and Paul McCartney.

His signature song ‘Mellow Yellow’ was released on October 24, 1966. It reached No. 2 on the Billboard Hot 100, got No.3 position on the Cash Box chart and obtained a gold record award for a sale of more than one million in the US only. His association with the Beatles group particularly Beatles' Paul McCartney paved the way for Donovan’s presence in the final recording session of the Beatles album ‘A Day in the Life’ and also his collaboration with them contributing lyrics and vocals to their song ‘Yellow Submarine.’

After the end of the decade of the 1960s, Donovan was not any more regarded as a significant player of popular music. However, he continued to tour and perform and wrote lyrics for some film music including ‘Pied Piper’ and ‘Brother Sun, Sister Moon,’ both of which released during 1972.

In mid-1966, Donovan was arrested for illegal possession of marijuana making him the first high profile musician to have experienced such fate. The incident caused him to miss the well-known Monterey Pop Festival, as he was required to keep himself outside the United States. The arrest had a telling effect on Donovan. He used the occasion of the release of his 1967 album "A Gift from a Flower to a Garden" to preach for stopping all forms of drug abuse. In the accompanying note of the record, he urged the youths to find other avenues to revive their consciousness and to generate peace from within their mind.

Donovan has two children borne out of his relationship with American model Enid Karl. Donovan Leitch Jr., an actor-musician was born in 1967, and actress Ione Skye was born in 1970. He married Linda Lawrence in October 1970. He fathered two daughters together with Linda, Oriole Nebula, and Astrella Celeste. He is also the stepfather of Julian Brian Jones (Leitch), son of Brian Jones and Linda Lawrence.

Donovan was inducted into the ‘Rock and Roll Hall of Fame’ on April 14, 2012. Besides he received an honorary degree of Doctor of Letters from the University of Hertfordshire in November 2003.