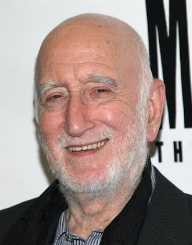 Dominic Chianese was born on February 24, 1931. He is an American Actor. He is also a musician and a singer.  He is renowned from the HBO’s series ‘The Sopranos’ as Corrado ‘Junior’ Soprano. He is currently Eighty-seven years of age.

Dominic Chianese was born on February 24, 1931, in Bronx, New York. He went to college. He attended HB Studio in Manhattan for his acting classes. His interest in drama and music grew while at the studio. He sang in the restaurant and played rhythm guitar for people’s entertainment.

In 1964, Dominic Chianese appeared in his first television series ‘East Side/West Side’ as Charlie. In 1965, he performed for his first time in ‘Oliver’ which was a Broadway show. He became a worker in a rehabilitation center in the New York’s Drug Commission. In 1974, he appeared in ‘The Godfather Part II’ as Johnny Ola.’

He also appeared in television series ‘The Sopranos’ as Corrado ‘Junior’ Soprano’ a role that gave him fame. He held this role until 2007. He had the opportunity to perform "Core ‘ngrato’’ in the third finale of ‘The Sopranos.’

In 2000, Dominic Chianese launched his disk ‘Hits’ which contained his songs. In 2002, he appeared in the film ‘Unfaithful’ as Frank Wilson.in 2003, he alongside AOL music launched ‘Ungrateful Heart’ which was a Neapolitan music compact disk. In 2004, he featured in ‘Hope and Faith,’ ‘When Will I Be Loved,’ ‘Crimes of Fashion’ and ‘King of the Corner.’ In 2007, he appeared in ‘The last New Yorker’ and ‘Adrift in Manhattan.’

In 2010, he appeared in the television series ‘Blue Hoods’ and ‘Damages.’ In 2011, he featured in ‘Mr. Poppers Penguins’, ‘The Secret Life of the American Teenager.’

Dominic Chianese also appeared in ‘Boardwalk Empire’ as Leander Cephas Whitlock a role he held till 2013. In 2012, he appeared in television series ‘The Good Wife’ as Judge Michael Marx role which he held till 2015. In 2013, he was in ‘The Family’ as Vinnie Caprese. In 2017, he featured in the film ‘Active Adults’ as Bart. In 2019, he will appear in ‘Umberto D’ as Umberto D. he will also appear as Enzo in the television series ‘The Village.’