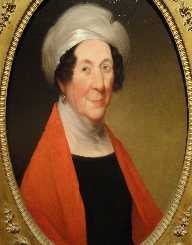 Dolley Madison was born 20th May 1768, to John and Mary Payne. Madison was born in North Carolina, British America, in the area called Guilford County. Madison had seven siblings, and Madison came from a comfortable family. Although her father wasn’t a Quaker, her mother did come from a Quaker background, and the children were reared in the Quaker faith.

They lived on a plantation, but some time after the American War of Independence, Madison’s father had freed his slaves and moved the family to Philadelphia. He went into business as a starch merchant, but the business failed by 1791. Payne died in 1792.

Madison’s mother opened a boarding house, but a year later she moved to West Virginia to move in with her daughter Lucy, who was married to the nephew of George Washington.

Dolley Madison married John Todd in 1790. He was a Quaker lawyer, operating in Philadelphia. The couple had two sons, and in 1793, Madison’s sister Anna moved in with them and helped to look after the children.

In 1793, Madison’s husband and her younger son both died from the yellow fever epidemic that swept through Philadelphia.

In May 1794, Madison was introduced to James Madison, a politician in the U.S. House of Representatives. By August they were engaged, and in September they married. He was not of the Quaker faith, and Madison was expelled from the Society of Friends for marrying outside of her faith.

They lived in Philadelphia until 1797, after which time James retired from politics. The family moved to Montpelier where James had a plantation and settled into their new life.

In 1800, Thomas Jefferson was elected as the third president of the United States. He invited James to become his Secretary of State, which James accepted. The family, including Madison’s sister Anna, were relocated to Washington.

Jefferson was a widower, and Madison was instrumental in furnishing the White House in conjunction with the architects. Madison also served regularly as hostess at official functions.

Jefferson retired in the lead-up to the 1808 election, and James Madison became party leader of the Democratic-Republicans. He was elected President, serving from 1809 to 1817. Madison became the First Lady.

Madison was well-known for hospitality, and she contributed greatly to James’ popularity. His second term began in 1812, and it was the year the War of 1812 began again Great Britain.

The British attacked Washington in 1814. Madison was part of the White House staff that had to leave in a hurry, but Dolley Madison had the foresight to make sure the Lansdowne portrait of George Washington was taken down and moved for safekeeping.

After the danger had passed, she returned to Washington to be with her husband.

Life After The Presidency

In 1817, after James retired from the presidency, the family once again moved into the plantation in Montpelier. James died in 1836, and Madison remained at the plantation for a further 12 months.

Madison was paid $55,000 for organizing and publishing her husband’s papers. Seven volumes were published in all.

Madison’s son Todd moved in with her. She had already had to sell some land with her husband to pay off debts that her wayward son had incurred, and in 1837, as she returned to Washington, Dolley Madison left Todd in charge of the plantation. He couldn’t manage the plantation due to his alcoholism, and Dolley Madison was eventually forced to sell the property to pay the debts.

In 2000, Dolley Madison was a member of the inaugural class of Virginia Women in History.

In World War II she had a ship, SS Dolly Madison, named after her.