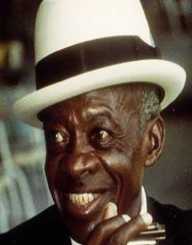 DeFord Bailey is regarded as one of the most mesmerizing harmonicas African American player and at the same time also the first one to perform at the Grand Ole Opry. He was among the people who were linked with the show “The Barn Dance” which was renamed as “Grand Ole Opry,” and later he also became one of the stars of the show. Although he played some instruments, he is best regarded for his performances for harmonica tunes.

DeFord Bailey was born on 14th of December in the year 1899 in Smith County, Tennessee. DeFord Bailey did not enjoy his childhood to the fullest as he had to go through some tough times. His mother died when he still very young and after that, he was raised by his paternal aunt, Barbara Lou Odum and her husband, Clark.

Because of all the hardships, he was also wholly bedridden as he had suffered severely from polio which ultimately affected his body and rendered him with a curved back.

This affected his overall bodily growth tremendously. But his inherent talent and passion for music never stopped as he paid keen attention to voices and natural sounds from the environment and tried to imbibe the same. This habit helped him a lot by shaping his artistry for the years to come.

As stated earlier, DeFord Bailey had an inherent talent, and he also belonged to a highly musical family that helped him to become adept at harmonica, guitar, and banjo at an early age. Throughout his teens, he performed at some places and also did some jobs during his adulthood.

But it was when he met a fellow Dr. Humphrey Bate that his career took off. He was offered to perform on radio station WSM’s “The Barn Dance.” Following the show and also observing his talent, he was soon made a regular performer on the radio where he would even dub the Harmonica wizard.

As he worked and practiced, DeFord Bailey started making sounds like an organic, swerving and swiveling dancing thing with his harmonica. It was through one of such performances only that Bailey informed the listeners about ‘Grand Opera’ thereby calling out his musical abilities. So, a historical name was born where Bailey is playing his “Pan American Blues” whose tones viscerally recreated the sound of a moving train.

Later he made some recordings for different tunes like “Fox Chase” and “Ice Water Blues.” Becoming a hit, he went for tours along with some show icons by the year 1933. But, during these tours, he had to face racial discrimination and was forced to dine and sleep alone and that too in a car.

Because of a 1941 decree banning radio artists from playing ASCAP tunes, DeFord Bailey was allegedly asked to change his repertoire to new songs. He did not agree to this and was let go. Disputes were there over this depiction of events between Hay and Bailey, as Bailey has said that he was generally asked during his history with the Opry not to play new songs, and felt that he was fired over asking to be paid more fairly one day.

After leaving Opry, DeFord Bailey had a successful show business and eventually got a space with several chairs and employees. Despite being approached on multiple occasions, Bailey opted not to return to the world of performance for the concern of being exploited.

Later on, in the year 1973, he befriended David Morton, who chronicled his life and also made some very important recordings of him playing. Morton even published a book in the year 1991 by the name of “DeFord Bailey: A Black Star in Early Country Music.”

As part of the Old Timers' Show, DeFord Bailey returned to the Opry to perform in February 1974; on December 14 of that year; he appeared again in celebration of his 75th birthday. He played for the last time at the Opry in April 1982, which drew a huge ovation. On July 2, 1982, Bailey left for heaven in Nashville, Tennessee.