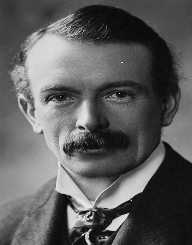 David Lloyd George was a prominent British liberal politician born in early 1863.  In 1916, he became Prime Minister of UK and served till 1922. He spoke fluent English even though he was from a Welsh family. He was the first Welsh prime minister ever in the history of UK. He is best remembered for his the welfare schemes which he administered during his time in power. Initially, he served as Minister of Munitions in 1915. This was still quite an important position in his political career.

David Lloyd George was born on January 17th, 1863 to Welsh parents. His place of birth was in Chorlton-on-Medlock, Manchester, England. He was the son of William George and Elizabeth. His father was a teacher by profession. Sadly, William succumbed to poor health and left behind his son who was still quite young.

His mother then moved out of their house to live with her brother Richard Lloyd. She moved with her children. George came to respect his uncle so much, and that is how he adopted his name “Lloyd.” When he grew up, he studied law. By 1884 he was through with his final examination which he did quite well.

David Lloyd George started practicing law at a legal practice which he set up on his own. He later began his career in politics towards the fall of 1880s. He had his first encounter in parliament in 1890 after he emerged winner of Caernarvon Boroughs’s by-elections.

He continued his business at his law firm which was quite a success. In 1897 he decided to merge his company with Arthur Roberts’. It then became Lloyd George, Roberts, and Co.  In 1905, Sir Henry appointed him to the Board of Trade as president. Henry was the Liberal Prime Minister at the time.

Henry was later succeeded by H.H. Asquith after his death in 1908. David Lloyd George was then appointed to Asquith’s government as Chancellor of the Exchequer. During this time they came up with People’s Budget.

David Lloyd George became Minister of Munitions in 1915 during a time of munitions shortage. He managed to restore the production of munitions and was greatly applauded for this success. In December 1916 he was appointed as prime minister following the resignation of H.H. Asquith. He led his country in successfully even though it was during a time of war. He set up many committees to deal with the situation.

David Lloyd George proved to be a great leader during this time in power. However, he later led a controversial life from 1922 and his popularity gradually diminished. Consequently, he resigned from his position of prime minister. He continued his career in politics after that though he never experienced the initial success that he had before his controversies.

David Lloyd George was had many affairs in his life as a single man. He was quite attractive and charming as well hence many fell for him. He later settled in 1888 when he wedded Margaret Owen. The couple was blessed with five children. He lost his wife Margaret in 1941.  He waited till 1943 and married once again this time to Frances Stevenson. The couple knew each other since 1910, and she had even been his mistress.

David Lloyd George succumbed to cancer on March 26th, 1945. He was 82 years old at the time of his death.