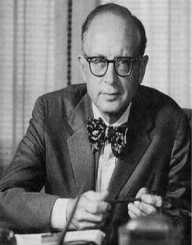 Daniel J. Boorstin is a former American lawyer and historian who studied the American civilization and served as from 1975 to 1987as the Librarian of the US Congress.

Daniel Joseph Boorstin was born to Samuel Aaron and Dora Olsan on October 1, 1914, in Atlanta, Georgia. The son of Russian Jewish immigrants, Boorstin moved with his parents to Tulsa Oklahoma when he turned three. His lawyer father defended Leo Frank in Georgia from the accusations of raping and murdering a young girl. The jury acquitted Leo Frank for lack of substantial evidence. In 1915, Frank was killed by a lynching mob. Samuel left Atlanta after a surge of anti-Semitic sentiments increased.

Boorstin grew up in Tulsa. He went to Central High School and graduated at the age of 15 in 1930. He studied at Harvard University and graduated with a Bachelor of Arts degree in 1934. He left the US to study law in England on a Rhodes Academic Scholarship. He graduated from Oxford University with two degrees in 1936 and 1937. He passed the admission test and was given the license to practice law in Massachusetts. He earned a doctorate degree from Yale University in 1940.

As a historical critic, Boorstin became a member of the American Communist Party. He left the party after the Germans invade Poland in September 1939, starting the WW2. He turned to the conservative ideology of American society. After receiving his doctorate from Yale, he joined Swarthmore College as the assistant professor in the history department. In 1944 he joined the history department of the Chicago University as the resident professor. He spent the next 25 years based at the university. Boorstin left Chicago University in 1969.

All three books won literary awards. The first book won the Bancroft Prize from Columbia University. The second part earned the Parkman Prize from the Society of American Historians. Boorstin received the Pulitzer Prize with the third book of the trilogy.

He published his second trilogy from 1983 to 1998. In 1983 he published The Discoverers, followed by The Creators in 1992, and the last book of the trilogy The Seekers published in 1998. In this sequel, Boorstin explored the scientific and philosophical evolution of humans. He received accolades for the in-depth analysis of the publications.

Some of his other notable books include The Image: A Guide to Pseudo-Events in America, Hidden History: Exploring Our Secret Past and Cleopatra’s Nose: Essays on the Unexpected. In his publishing career, Boorstin published 20 historical books. He majored on the evolution of mankind and American society.

In 1975, then US President Gerald Ford appointed him as the 12th Librarian of the US Congress. At the time of his appointment, Boorstin doubled as the director at the National Museum of History and Technology. President Ford received the support of the American Authors Guild on the appointment. On the other hand, the American Library Association opposed the appointment arguing Boorstin lacked the relevant experience to manage the office. Boorstin passed through the US Senate confirmation session without much debate.

He embarked on the renovation and reviving the literary culture in American society. Among his notable achievements are renovations of historical buildings of historical significance. He renovated the Thomas Jefferson Building to its former glory. Boorstin renovated the Center for the Book within the Congress library, later renamed after him. In August 1987, he retired from the position to concentrate on his writing career.

Boorstin married Ruth Carolyn Frankel in April 1941. He fathered three sons with her. The marriage ended on February 28, 2004, upon his death. Unknown to many, he relied on Ruth to edit all his manuscripts before publication.

On February 28, 2004, Boorstin died in Washington DC of pneumonia. His work was commemorated by the 1997 establishment of The Boorstin Center for the Book Awards.

In addition the American recognition, Boorstin was a dignified recipient of awards from several European and the Japanese governments.