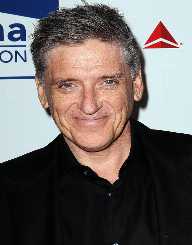 Life for Craig Ferguson began in the bustling Scottish city of Glasgow Craig Ferguson was born on the 17th day of May in the year 1962. His father was a Royal Mail worker, named Robert Ferguson, while his mother was Janet Ferguson. Craig is one of a family of four children made up of a brother and two sisters. In his growing-up years, Ferguson followed the Presbyterian dictates in Scotland and his primary school years were at Muirfield Primary. Craig attended high school at Cumbernauld High but dropped out because of binge drinking when he turned 16 years of age.

Craig Ferguson did not get a grip on his first love for day one as he had come out of drinking troubles which made him drop out of school. Craig was not daunted as he tried his hands on other things to get his life moving in the right direction. He did not get his mojo on a platter of gold as he had to do the odd jobs on his journey to acclaim.

Craig Ferguson set out as a drummer for an unsung Glasgow-based rock band but realized that he had a driving passion for comedy. In between rounds as a bartender and drumming, Craig got a chance to meet Michael Boyd, who was the artistic helmsman for The Tron Theater.  Boyd gave Craig the lead to pursue his acting career.

As Craig Ferguson explored acting, he was able to create a character known as Bing Hitler. It was not long before he gained prominence based on this act in the city of Glasgow. Like wildfire, Craig quickly became a reference point for public performances. As he savored this early acclaim, Craig Ferguson also explored Music Theater and recorded appreciable success. The BBC gave him a slate for TV appearances when he was accepted to join the cast for a sitcom titled Red Dwarf. Craig played the role of Confidence in this episode.

As Craig Ferguson explored TV, he was accepted to present the 1993 Scottish archaeology documentary as the Dirt detective. His mission was to explore the historical heritage sites across Scotland. He made the Craig Ferguson Show, and this was on air across the United Kingdom. This show became a full-blown series with good ratings. It also featured the pair of Helen Atkinson-Wood and Paul Whitehouse.

Craig Ferguson felt the need to break into international consciousness, and he was considering moving across the Atlantic. Craig landed in America in the year 1994 and was on the cast for the first time in the U.S on the set of “Maybe This Time.” This was a comedy series that enjoyed a short spell. It also starred Marie Osmond and Berry White. Craig's big role was to come in the “The Drew Carey Show,” which screened throughout the seven years to 2003. He played the character of Nigel Wick here.

Craig Ferguson wore many hats and this included film writing and directing. Although at the early stage, Craig did not look like one who will become the cynosure of all eyes, he knew where he was headed. From the UK to across the Atlantic, as the years unraveled, he became a huge celebrity. Craig Ferguson continued his passion for stand-comedian roles and TV hosting with excellent reviews. He starred in the 1999 film, The Big Tease. In the year 2000, he was on set for Saving Grace, while he featured in the year 2003 in I’ll Be There.

As Craig Kilborn bowed out as host of the “The Late Late Show” on CBS in the year 2004, Craig took up the mettle.Craig made his first appearance as host of the show in January the following year. It was steady, but his élan quickly seeped into the consciousness of American TV audience without fail.

Craig Ferguson delved into writing forays in the year 2006 and published a novel titled “Between the Bridge and the River.” It was a book that zeroed-in on a pair of childhood friends from Glasgow who set on a bizarre adventure with two other illegitimate half-brothers of theirs. Their life intertwined with an ex-TV evangelist who loved to court ladies from the red-light districts.

Craig Ferguson's autobiography was published in the year 2009, and it was audaciously titled “American on Purpose: The Improbable Adventures of an Unlikely Patriot.” This memoir was recognized in 2010 when it earned a nomination with the audiobook version for the Best Spoken Word Album category of the Grammy Awards.

Craig Ferguson's life on the big screen was already busy in 2004 before he was signed up for the CBS TV comedy series. It was not long before it raked up the ratings and got an Emmy nomination within its first twelve months on air.
Craig also lent his voice for use in films like “How to Train Your Dragon” in the year 2010 and this was highly-rated. He reprised the role in the 2011 edition of Winnie the Pooh. Craig had celebrated again in 2012 when he was heard in the film titled “Brave.”

Craig Ferguson had enough of The Late Late Show, and in 2014, precisely in April, he signaled his exit. He appeared last on the show in December of that year after 1000 episodes. Craig's next port of call was the show, Celebrity Name Game. He worked on set as the host. He also took center stage with “Join or die with Craig Ferguson” in the year 2016. This show was a panel –based feature that assembled guests, comedians of all shades as well as other topical experts.

Apart from The Late Late Show on CBS and “The Drew Carey Show,”Craig Ferguson also got mentioned for other roles.Craig played Gobber the Belch (voice-over) in the award-winning animated feature in the year 2010 which was titled “How to Train Your Dragon.” His character as Nigel Wick on The Drew Carey Show was one that surmised the life of a somewhat unlucky Briton with an eccentric bent.

On beating his fear of flying, Craig signed up for flying classes to help him overcome the phobia. Craig Ferguson is also active on Lollipop Theater Network, where he serves on the board. The organization screens movies on theater showing to special needs children. In this case, kids who have dire health conditions across the country are the beneficiaries.

“I’ll be There” was the first film Craig Ferguson directed in 2003 and he was able to win the Best Film Audience Award at the Aspen Film Festival. He reprised these at the Valencia and Dallas festivals. “Between the Bridge and the River,” which he released as a novel in 2006 was on the year’s bestseller list.

In the year 2009 when New York Times published its bestseller list, his autobiography “American on Purpose: The Improbable Adventures of an Unlikely Patriot” made the count. Ferguson’s show ‘The Late Late Show with Craig Ferguson’ won the prestigious Peabody Award in 2010 for Excellence in Broadcasting for his interview with Archbishop Desmond Tutu.

Craig Ferguson had two previous marriages. He was married to Anne Hogarth, and the pair had no children. He again married Sascha Corwin, and they had a son from the union, but they divorced. Craig married Megan Wallace-Cunningham on the 21st day of December 2008, and they were blessed with a son named Liam James. Megan works as an art dealer.