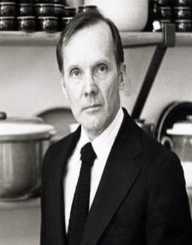 Charles C. “Chuck” Williams was born on October 2, 1915, in Jacksonville, Florida. He grew up with his mother and father, along with his sister.  His sister died from a brain injury when he was young. He learned to cook from his grandmother on his mother’s side. She had owned a restaurant in Lima, Ohio, and taught him everything she knew.

During his formative years, his family lived during the Great Depression. As a result of no money and jobs, his father moved the family to Southern California where he worked until he left his family. At this time the family lived near the Sniff’s farm where Chuck Williams worked on the farm in the afternoon after school. The farm was near Palm Springs and was called the Sniffs Date Gardens in Indio. In the morning the owners, the Sniffs took Chuck Williams to school at the Coachella Valley Union High school, and in the afternoon he worked the farm. He lived this lifestyle for approximately seven years until he graduated high school.

Upon his high school graduation, he moved to Los Angeles. During the 1930s and 1940s, the world erupted into World War II. Chuck Williams spent four years working overseas as a mechanic for Lockheed International and not serving in the trenches because of a medical condition. He worked on planes that were used in India and also East Africa where he was stationed. After the war ended he returned to Los Angeles and started a new chapter in his life.

Always having an interest in cooking he kept abreast of all things and items used in cooking.  And he worked jobs to make ends meet.  Then one day while on a weekend vacation with friends in Sonoma, California, while playing golf he fell in love with the area and moved there in 1947. Upon his arrival there, he started work as a building contractor.  Not only that but he worked as a window dresser at a department store in Los Angeles.

A couple of years after he moved there, Chuck Williams and some of his friends went for a three-month trip to Europe and Scandinavia in 1952.  As he had an interest in cooking he took an interest in how and what the international cooks used in their home kitchens.  Based on this experience, he decided to open up his own store and sell kitchen and home items.  Since he liked French cookware, he decided to sell mainly that.

In 1953, he bought his first hardware store and started selling the items there that he felt were being used in American kitchens and around the house.  After a few years, he converted the stock that he sold to French cookware.  In 1956, according to his biography on the Williams Sonoma website, he created a business with a store in Sonoma California. At around the same time, he moved the business to San Francisco in 1958.

In 1959, Chuck Williams started buying trips to Europe and brought back different recipes and cookware to his store in the USA to sell. The first mail-order catalog for Williams Sonoma was created in 1971. He began importing new technology for the kitchen in 1973. With the beginning of the balsamic sauce from Italy in 1978, what became known as Artisan Foods began exporting their cooking spices and the like to America.  And the business continued to expand to reach 600 stores nationwide.

But as with all good things, he sold his business to Howard Lester and Jay McMahan in 1978 for $100,000.00.  Although he sold the business he maintained interest and close contact with the business.  He served as its chairman until 1986 and also participated in many of the major events of the company.  The company stock went public in 1983 on the New York Stock Exchange.

Not one to rest on his laurels, he began paying a scholarship for students in the culinary field.  He did this through several different organizations including the Culinary Institute of America. Chuck Williams also served on the board of the American Institute of Food and Wine as well as was named in the “Who’s Who of Food and Beverage?” in the year 1994.  He also received while living the Lifetime Achievement Award in 1995 from the James Beard Foundation.

Chuck Williams was inducted into the Hall of Fame for the Culinary Institute of America and the Direct Marking Association.  He also opened up the Williams Sonoma cooking school in 2013. Due to a desire to maintain a connection to his past, the original store in Sonoma, California was re-opened in 2014 and has since become a focal point of the company.

Chuck Williams died at the age of 100 on December 5, 2015.  After his death, the estate of Chuck Williams donated almost 4,000 pieces for his culinary cookware collection. This was used to create the Chuck Williams Culinary Arts Museum which is operated by the Culinary Institute of America.

Of note, in 2017 the Chuck Williams Culinary Arts Museum at the CulinaryInstitute to America at Copa opened.  It honored him and his accomplishments in all things associated with home life.