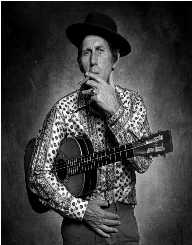 Renowned American guitarist and country music producer Chet Atkins was born on the 20 June 1924 in Luttrell, Tennessee. He had two brothers and a sister, and the family struggled financially. His parents separated when he was young, and he initially was raised by his mother, later moving to rural Georgia where his father lived. His father was a music teacher, and evangelical singer. At a young age, he started playing the guitar. He was influenced by Merle Travis and his finger-picking style, Les Paul, and Django Reinhardt.

After graduating from high school, Chet Atkins worked in radio. His first job was with WNOX in Tennessee. After that, he worked on various radio stations. His first recording was Guitar Blues in 1946, and he also played with Mother Maybelle Carter & The Carter Sisters. He moved to Nashville and worked for RCA first as a guitarist, then, by the end of the 1950s,  as a consultant and producer. Artists he worked with included Elvis Presley, Roy Orbison, and Perry Como.

Atkins worked with producer Owen Bradley at Decca on marketing country music with a commercial slant which became known as the Nashville Sound during the 1960s. They had success producing songs such as He’ll Have To Go (1959) by Jim Reeves, Last Date (1960) by Floyd Cramer and The End of the World (1963) by Skeeter Davis. In 1970 he won a Grammy for Me and Jerry (with Jerry Atkins) and went on to record The Atkins-Travis Traveling Show (1974) with Merle Travis, Chester and Les (1976), Sneakin’ Around (1992) and Jam Man (1960).
Atkin recorded duet albums with a dozen artists including Doc Watson and Mark Knopfler and performed with a wide range of artists including Doc Watson, Les Paul, and the Boston Pops.

He was also involved in the design of Atkins Signature Guitars Atkins resigned as vice-president of RCA in 1982 and moved to Columbia Records. After that, he continued touring and recording.

In 1973 Chet Atkins was inducted into the Country Music Hall of Fame. The same year he was awarded a Lifetime Achievement Award by the National Academy of Recording Arts and Sciences. In 1982 he was awarded a Pioneer Award by the Academy of Country Music.  South Street in Nashville was renamed Atkins Place in 1991. As a guitarist, he won numerous awards including the Billboard Century Award. Chet Atkins was inducted into the Rock & Roll Hall of Fame in 2002. In 2003, Country Music Television named Atkins number 28 on their 40 Greatest Men of Country Music list.

In 1946 Chet Atkins married Leona Johnson who as a young woman was part of the due The Johnson Sisters. The couple had one daughter, Merle, and remained married until he died. Atkins died on the 30 June 2001 from cancer. He was 77 years of age.

His autobiography, Country Gentlemen, was published in 1974.