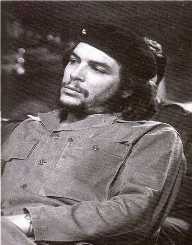 Ernesto Guevara was born on 14th June 1928, to Ernesto Guevara Lynch, and Celia de la Serna y Llosa. He was born in Rosario, Argentina, into a middle-class family, and had four younger siblings.

Being of Spanish heritage, Ernesto Guevara's father, who was a strong Republican, would often host veterans in their home from the Spanish Civil War. This exposed Guevara to politics from a young age, particularly views with a leftist leaning.

As a youngster, Ernesto Guevara had a wide variety of pastimes. He was an excellent athlete, despite having acute asthma, and participated in swimming, golf, football, and cycling. He was also a competent chess player, having been taught by his father, and started entering local tournaments.

As he grew into his teens, Ernesto Guevara developed a love of poetry. His parents were well read, with over 3,000 books in their library, which encouraged Guevara to become an avid reader.

Ernesto Guevara went to the University of Buenos Aires to study medicine. He began his studies in 1948, but took time out after two years, to travel. In 1950 he went on an extended bicycle trip through the north of Argentina. The trip was over 4.500 kilometers. In 1951, he went on a motorcycle tour of South America. He visited most of the countries, and the trip took him nine months.

Whilst on his trip, he encountered several instances that cemented his communistic perspective on life. He took extensive notes while on the trek, and these were later collated into a book, called, The Motorcycle Diaries. The book was adapted into a movie in 2004.

Ernesto Guevara returned to university and graduated from his medical studies in 1953.

During the second half of 1953, Ernesto Guevara again travelled, this time through Bolivia, Peru, Ecuador, Panama and Costa Rica. He arrived in Guatemala at the end of the year, and decided to settle there as the government in power at the time were instigating reforms that Guevara agreed with, and he felt at home and able to use Guatemala as a base to take whatever action he felt would be necessary in becoming a revolutionary.

Ernesto Guevara shortly thereafter was introduced to high-level government officials, and also created links with some Cuban exiles who were involved with Fidel Castro. It was during this time he became known as ‘Che’.

In 1954, the communistic government was overthrown by a CIA backed alternative. Many suspected communists were captured and executed, and land that had been taken under the previous government was returned to its rightful owners.

Ernesto Guevara wanted to fight for the cause, but soon went back to medical duties. His outspoken opinions in support of the previous government were noticed, and he was earmarked for execution. He eventually got safe passage to Mexico.

The actions of the new incoming right-wing government cemented Guevara’s idealisms on Marxism and the need for the struggling Latino population to take up arms against the United States.

When he arrived in Mexico,Ernesto work  at a hospital in Mexico City, and also lectured at the National Autonomous University on medicine. He maintained his ties with the Cuban exiles, and this eventually led to him meeting Fidel Castro.

At the time, Castro was plotting to overthrow Batista in Cuba, and Ernesto Guevara decided to join Castro. They were both totally committed to “anti-imperialism” and this formed a strong bond between them.

Fidel Castro took control of Cuba in 1959, with Guevara’s help, and Guevara was put in charge of La Cabana prison. It is thought that several hundred people were executed on Guevara’s orders. He was also appointed as president of the national bank and Minister of Industry. Guevara was instrumental in Cuba becoming a communist country.

There are several videos, some from 1964 and some from 2001, showing Guevara speaking on a variety of topics.

In 1964 he travelled to New York to speak at the United Nations. He was head of the Cuban delegation. He criticized the UN for not doing anything about apartheid in South Africa, and he also spoke out against the policy the United States had towards their black population.

The Cuban economy eventually crumbled, and in 1965 Guevara moved to the Congo to train troops in guerrilla warfare, but the revolution failed so he moved back to Cuba.

In 1966 he went to Bolivia to encourage a revolution, and in 1967 he was caught by the Bolivian army and executed.

Along with the video footage archives, Guevara authored around 30 works, most of which weren’t published in English until between 1996 and 2011. One of the best known is his The Motorcycle Diaries which was also turned into a movie.

Ernesto Guevara received various honors over his lifetime, including:

Guevara was named by Time as one of the “100 Most Influential People of the 20th Century”.

Ernesto Guevara married his first wife, Hilda Gadea, in 1955. They remained together until 1959, and had one child together, a daughter named Hilda.

He married his second wife, Aleida March, in 1959, and they were still together when he died. They had four children – Aleida, Camilo, Celia, and Ernesto.

On one hand he is revered in socialistic circles for his rebellion and revolution fighting against capitalism and imperialism. On the other hand, he is also remembered for executing prisoners in Cuba without any trial beforehand.

Either way, his name is cemented in history as a person who stood up for his beliefs and took action to try and make the world a better place, eventually dying as a martyr for his cause.