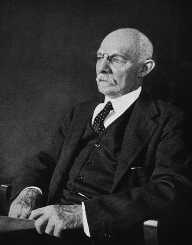 Sir Charles Scott Sherrington was an eminent neurophysiologist. Besides, he was also qualified as histologist, bacteriologist, and pathologist. He had quite many educational degrees to his credit viz, OM GBE PRS FRCP FRCS, etc. He gained utmost fame for his research on the functions of neurons, his explanation, and understanding of the central nervous system that specifically focussed on the integrative system of our reflex action.

Charles Scott Sherrington was born on 27 November 1857, in Islington, London, United Kingdom. There is a controversy about the identity of his parents. According to the official biographers, he was the son of James Norton Sherrington, a country doctor and his wife, Anne Thurtell. However, it has been found that James Norton Sherrington died in 1848 in Yarmouth, almost nine years before the birth of Charles and he was an ironmonger and helped artists in their colouring works and was never a doctor. As per the record of 1861 census, Charles’s name is mentioned as Charles Scott with Caleb Rose as his biological father and Anne Sherrington as his widowed mother.

Charles was brought up in the Caleb Rose family in their Anglesea Road, Ipswich home, where the whole family shifted their base in 1860 as the London weather was not suitable for Caleb Rose’s asthmatic tendency. In 1871, Charles started attending the Ipswich School. As he was interested in learning medicine from his childhood days, he began to study with The Royal College of Surgeons of England. He was keen to study at Cambridge but could not do so immediately due to some financial constraints.

In 1876, Charles Scott Sherrington enrolled at St. Thomas’ Hospital for the furtherance of his study of medicine. Three years later, he entered Cambridge as a non-collegiate student. He could successfully enroll himself at the Gonville and Caius College, Cambridge the following year. On August 4, 1884, he earned the Membership of the Royal College of Surgeons. He also secured the degree of M.B., Bachelor of Medicine and Surgery from Cambridge in 1885. In 1886, Charles added another feather to his educational qualifications when he became the Licentiate of the Royal College of Physicians, a group of elite medical experts.

In 1884, Royal College of Surgeons included Charles Scott Sherrington as its member and Sherrington, along with a compatriot scientist published a paper on brain surgery which they conducted on a dog. Cambridge University offered him a place in the medical team set to travel to Spain to investigate an outbreak of Asiatic Cholera immediately after having earned his Bachelor’s degree. At that time, a Spanish Physician claimed to have invented a vaccine to fight the epidemic.

Charles with his other two fellow teammates went to Spain to investigate the outbreak and the efficacy of the vaccine. Upon their return, they submitted a report to the Royal Society discrediting the Spaniard’s claim about the vaccine. In 1886, he went to Italy to investigate another cholera outbreak.

At that time, the Brown Institute for Advanced Physiological and Pathological Research of the University of London was a premier institute for human and animal physiological and pathological research doing pioneering work in the above field. Charles Scott Sherrington was appointed as superintendent of the said institute in 1891 where he conducted his research and study on both humans as well as animals.

In 1892, Charles Scott Sherrington discovered that muscle spindles are those different muscles which initiate stretch reflex. He was appointed as Holt Professor of Physiology, his first job of full-professorship at Liverpool in 1895. With this appointment, Charles finally stopped his involvement with active pathology. So far, he had worked with several species of animals like cats, dogs, monkeys, and apes that had been deprived of their cerebral hemisphere.

Charles found that reflexes must be regarded as integrated activities of the total organism and they are not just the result of activities of the solitary ‘reflex arcs.’ The concept was accepted. He continued his study and research on reflexes and reciprocal innervations. He compiled all his work on the subject and allied field and came up with a lecture in 1897 called 'Croonian Lecture.' It is an essential document on animal pathology.

In 1906, a compilation of ten of Sherrington’s Silliman lectures, delivered at Yale University in 1904, was published in a book titled ‘The Integrative Action of the Nervous System.’ In 1913, Oxford University offered Charles Scott Sherrington the Waynflete Chair of Physiology, and he subsequently tutored some bright students there many of whom even became Nobel Laureates afterwards. His teaching was interrupted during World War I. After the end of the war, in 1919, Sherrington came up with his major work, a textbook titled ‘Mammalian Physiology: a Course of Practical Exercises.’

Charles Scott Sherrington also wrote many poems during his spare time. These were wartime poems which were collected and published in a book titled 'The Assaying of Brantius and other Verse' in 1925. His contention that mental performance affects physiological process was logically described in his highly applauded lecture named 'The Brain and its Mechanism' delivered at Cambridge in 1933.

Charles Sherrington retired from the Oxford University in 1936. He went back to his hometown of Ipswich and settled down there building his own home. He continued to keep a tab on the proceedings through correspondence with students and intellectuals all over the world. The passion for poetic, philosophical and historical interest was imbibed in his mind by his biological father Caleb Rose from his childhood days. He continued to work in this respect also. From 1944 onwards, he was the President of the Ipswich Museum. He served in the position till his death.

In 1932, Charles Scott Sherrington shared the Nobel Prize for Physiology or Medicine with Edgar Adrian for their work on the functions of neurons.

In 1922, he was awarded a Knight Grand Cross of the Most Excellent Order of the British Empire.

Besides being honoured with several other scientific awards by various organizations, Charles Scott Sherrington was given honorary doctorate from 22 different Universities of the World.

Charles Scott Sherrington married Ethel Mary Wright on August 27, 1891. The couple had one son, Carr E.R. Sherrington. He died due to heart failure at the age of 94 on March 4, 1952, in Sussex, England.