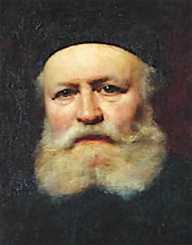 Charles Gounod was born on June 17, 1818, in France. His parents were sorts of artists. His father was Francois Gounod, who did traditional art. His mother was a piano played named Lemonchois Victoire. Sadly, Francois died when Charles was only four years old.

Charles Gounod had some musical training at his parent’s house when he was a child. Since his mother played the piano, she was able to teach her son about it. The training he got from his mother, as well as the performances he gave as a child and young teen, encouraged him to pursue music as a career.

After he left his home, he began his studies at the Paris Conservatoire in 1836. There, some of his most famous teachers while at the Conservatoire was Fromental Halevy and Pierre Zimmermann. About three years after finishing his studies at the Conservatoire, he moved to Italy to study religious music and the music of famous Italian musicians. While in Italy, he considered taking on a religious profession, but did not. He moved back to France to start his career in the early 1840’s.

After returning from Italy Charles Gounod went on to take on a job as an organist in a religious institution. He both dealt with music and religion for a few years, before devoting himself entirely to music. In 1852, he left his job as an organist and started to work as a teacher/director for choirs and bands around Paris. While working as a teacher, he continued to work on making his own music. During this time, he began to write some operas and songs. One of his first astonishing works of music was the Messe Solennelle. This song established him as a great composer. From then on, he continued to write symphonies, operas, and other songs. Some of his famous operas and songs are listed below.

Funeral March of a Marionette

Near the end of Gounod’s life and career, he moved from France to England. While there, he continued to write secular music, but he also went back to his earlier vein of work, and wrote some religious songs as well. He continued to make both types of music until the days before his death.

Charles Gounod won the 1839 Prix de Rome for one of his songs, Fernand.

He was the first conductor of the Royal Choral Society.

One of Gounod’s famous religious songs, Marche Pontificale (composed in 1869) was made the nation anthem for the Vatican City in 1949, decades after his death.

Charles Gounod married the daughter of one of his mentors, Zimmermann. His wife’s name was Anna. The couple lived on the Zimmermann’s property, building their own house on one of their lots. Soon after, the couple had two children together, Jean and Jeanne.

On October 18, 1893, Charles Gounod suffered a stroke. He died the same day, in Saint Cloud, France. He was 75 years old when he passed away.