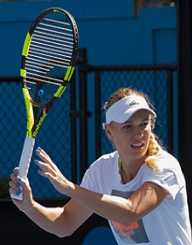 Caroline Wozniacki was born 11th July 1990, to Piotr Wozniacki and Anna Wozniacka. She was born in Odense, Denmark.

Caroline Wozniacki comes from a sporting family. Her father played professional association football, and her mother played for the Polish women’s national volleyball team. Although her parents were originally from Poland, they moved to Denmark when Caroline Wozniacki's father signed up to join one of the Danish football clubs. Her brother, Patrik, is a professional footballer in Denmark.

Caroline Wozniacki was successful as a junior, winning several tournaments in 2005. She debuted on the WTA Tour the same year, but lost both tournaments in her first-round matches.

In 2006, Caroline Wozniacki played in the junior division of the Australian Open. She was the top ranked junior female, and was second seed with her partner in the doubles tournament. In the singles she lost in the final, in the doubles she bowed out in the semi-finals.

She continued in 2006, to compete in the junior divisions of several major tournaments. She got through to various stages of the finals in some of them.

On 29th October 2006, Caroline Wozniacki won her first senior title. It was the International Tennis Federation (ITF) tournament in Istanbul, carrying a prize of $25,000. She went on in February 2007, and then again in March, to win two more ITF tournaments. The first was in Italy, the second in Las Vegas, US, and both carried a prize of $75,000.

Caroline Wozniacki then went on to win her first two WTA Tour titles – the Nordic Light Open in Sweden, and the Pilot Pen Tennis in New Haven.

Caroline Wozniacki competed in the US Open ranked as the 21st seed, but by the time she entered the Tier III AIG Japan Open Tennis Championship, she entered as the top seed on the WTA Tour.

She competed successfully in various tournaments during the year, and finished with a win-loss ratio for the year of 58-20 in singles. Wozniacki finished 2008 ranked at 12th for singles.

2009 saw Caroline Wozniacki continue to compete in various tournaments, including the Grand Slam majors. Her rankings steadily rose. She was seeded 11th at the Australian Open, and seeded ninth at Wimbledon.

She won several tournaments during the year, and for the first time was eligible to compete in the Sony Ericsson Championships in Doha, but didn’t make an impression during the tournament.

Although not winning tournaments in early 2010, Caroline Wozniacki became the third ranked player worldwide, followed shortly by becoming second in the rankings.

She continued to play in Grand Slams such as the French Open and Wimbledon, advancing to various stages of the finals.Wozniacki won the e-Boks Danish Open, and at Montreal, and went on to win the New Haven tournament for the third time in a row. This also gave her the US Open Series title.

2012 saw a decline in her form, and Caroline Wozniacki slipped out of the top ten. She did have some tournament wins, though, and finished the year ranked in 10th position. Caroline Wozniacki’s declining form continued during 2013, and for the first time in five years, she failed to reach the quarter finals in any of the Grand Slam events. Despite not having on-court success, Wozniacki maintained her 10th position in the rankings

Although sustaining injuries throughout 2014, Caroline   improved. Having fallen to 18th in the rankings at one stage, she returned to the top ten and finished the year ranked 8th due to her positive performances.

In 2015 at one stage Wozniacki was ranked 4th, but she finished the year a disappointing 17th. Her rankings continued to slide in 2016 after a severe ankle injury during practice, which saw her withdraw from all clay court tournaments that she had been going to play in. She slid down to 34th in the rankings. Her slide continued, and she ended up outside the top 50.

Caroline Wozniacki continued to compete, despite being plagued by different injuries, and even won two WTA titles during the year, which saw her return to the top 20.

2017 was a better year for Caroline Wozniacki as her performances continued to improve, and her rankings continued to rise. She rose to number 14 in the rankings, and followed this up by a good performance in the Rogers Cup in Toronto, which saw her rise to number five in the world rankings.

With her performances throughout the year, she finished with a world ranking of number three.

Caroline Wozniacki started out as a junior with her father coaching her. She had several other coaches for very brief periods including Ricardo Sanchez, Thomas Johansson, Thomas Hogstedt and Michael Mortensen. Some were only with her for a period of a few months. In the end, Wozniacki announced that her father would be her coach for the remainder of her career.

In 2009, Caroline Wozniacki did a deal with Adidas to endorse tennis apparel designed by Stella McCartney.

In 2010, she began a three-year deal with Turkish Airlines to promote their business class services.

Some of her other endorsements included:

2013 – Caroline Wozniacki returned to Babolat as her racquet sponsors

In January 2014, Caroline Wozniacki announced her engagement to Rory McIlroy, a professional golfer from Northern Ireland. In May of the same year, the engagement had been called off by McIlroy.